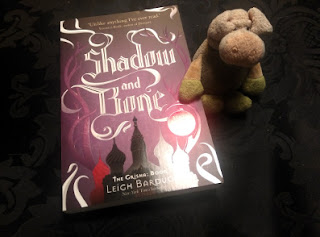 Shadow and Bone (The Grishaverse #1)
by Leigh Bardugo

What is it about:
Surrounded by enemies, the once-great nation of Ravka has been torn in two by the Shadow Fold, a swath of near impenetrable darkness crawling with monsters who feast on human flesh. Now its fate may rest on the shoulders of one lonely refugee.

Alina Starkov has never been good at anything. But when her regiment is attacked on the Fold and her best friend is brutally injured, Alina reveals a dormant power that saves his life—a power that could be the key to setting her war-ravaged country free. Wrenched from everything she knows, Alina is whisked away to the royal court to be trained as a member of the Grisha, the magical elite led by the mysterious Darkling.

Yet nothing in this lavish world is what it seems. With darkness looming and an entire kingdom depending on her untamed power, Alina will have to confront the secrets of the Grisha . . . and the secrets of her heart.

What did I think of it:
I loved Six of Crows and The Language of Thorns, so I was very happy when I got this book as a present on Saint Nicholas' Eve.

And this is yet another great read.

The setting of this book and the choice of words makes Ravka sound like Russia from around 1900. There's even a character that resembled Rasputin. I must say I loved the setting and the atmosphere of this story.

Alina is mostly a heroine I could root for. She does at one time act rashly in my opinion, by believing and acting on a story told by someone without checking the facts or asking for proof. I shook my head at her gullibility, and later again when I found out that the story turned out to be true. But that one point of lazy storytelling aside the plot of this book is fairly solid and intriguing.

I didn't like one of the love interests and of course it looks like he's the one who will come out on top of the love mountain. But it seems that the one I liked will still play a large part in the next two books, so I will see how things turn out.

There are a couple of really interesting minor characters as well, and I hope those will be in future books as well. I'm very interested to see what will happen to them.

All in all this is a really cool story and I most definitely get my trotters on the other books in this trilogy.

Why should you read it:
It's a great YA Fantasy read.