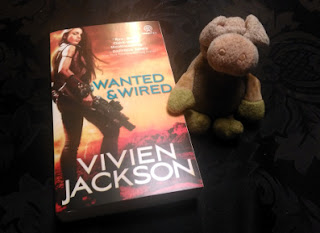 What is it about:
Rogue scientist • technologically enhanced • deliciously attractive
Heron Farad should be dead. But technology has made him the man he is today. Now he heads a crew of uniquely skilled outsiders who fight to salvage what's left of humanity: art, artifacts, books, ideas-sometimes even people. People like Mari Vallejo.

Gun for hire • Texan rebel • always hits her mark
Mari has been lusting after her mysterious handler for months. But when a by-the-book hit goes horribly sideways, she and Heron land on the universal most wanted list. Someone set them up. Desperate and on the run, they must trust each other to survive, while hiding devastating secrets. As their explosive chemistry heats up, it's the perfect storm...

What did I think of it:
This was an enjoyable read but felt a bit out of balance.

It starts out with a hit gone wrong and Mari and Heron on the run. While on the run they suddenly feel the need to give in to the lust they feel for each other. Now I absolutely have nothing against romance, but I seriously hate it when people who are in danger start making out instead of waiting with their make out session until they're safe.

Still the story was entertaining enough to stick with it. I really liked the writing and a lot of the characters.

Then the story took a turn that didn't work for me. It felt like the romance climax came much too soon and then there was a lot of extra story still left. I'd have liked the story better if the romance had been stretched out until the end instead of getting resolved long before the action storyline.

I might still try the next book in this series though, as I liked the world, and the hero of the next book was introduced in this one and I liked him.

Why should you read it:
It's an enjoyable SF Romance.