The Kiss of Deception - Book Review 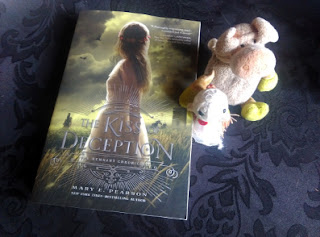 The Kiss of Deception (The Remnant Chronicles #1)
by Mary E. Pearson

What is it about:
The Kingdom of Morrighan is steeped in tradition and the stories of a bygone world, but some traditions Lia can't abide. Like having to marry someone she's never met to secure a political alliance.

Fed up and ready for a new life, Lia flees to a distant village on the morning of her wedding. She settles in among the common folk, intrigued when two mysterious and handsome strangers arrive—and unaware that one is the jilted prince and the other an assassin sent to kill her. Deceptions swirl and Lia finds herself on the brink of unlocking perilous secrets—secrets that may unravel her world—even as she feels herself falling in love.

What did I think of it:
What can I say?

Although I can understand that Lia isn't happy about her arranged marriage, I thought she really didn't think through the consequences of her actions before running off. But then again Lia isn't the sharpest tool in the shed.

She has this huge very recognizable temporary tattoo made especially for her marriage. So when she and her maid have reached the town they want to start their new life, she of course goes bathing in a creek instead of waiting for her maid to finish bathing in the tub inside their cottage! And they talk about their former life while walking around town. At times it's like Lia wants to get caught.

And you don't want to know how prejudiced Lia is, or the weird conclusions she draws from a minimum of information.

The main suspense for a big part of this book is which of the two handsome strangers is the prince and which is the assassin. Both of course fall head over heels for Lia, although it's a bit of a mystery for me what it is in Lia that makes her the object of their obsession. As for which one is what: let's say that I would have written the story differently.

The worldbuilding is sparse, but imo hints at this being a SF Fantasy world. In other words: A long long time ago, in a galaxy far away they once set out to colonize a new world and somehow ended up going back to medieval/renaissance times. But I could be wrong.

Still this is an entertaining read, even if it's just to see what stupid things Lia gets away with. I also liked some of the secondary characters. I will most probably get hold of the next book to see if Lia will learn or will keep bumbling around.

Why should you read it:
It's an entertaining YA Fantasy read.