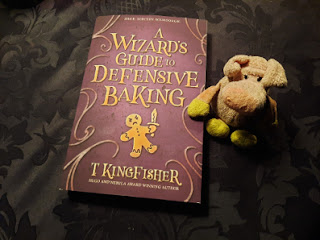 A Wizard’s Guide to Defensive Baking
by T. Kingfisher
What is it about:
Fourteen-year-old Mona isn’t like the wizards charged with defending the city. She can’t control lightning or speak to water. Her familiar is a sourdough starter and her magic only works on bread. She has a comfortable life in her aunt’s bakery making gingerbread men dance.
But Mona’s life is turned upside down when she finds a dead body on the bakery floor. An assassin is stalking the streets of Mona’s city, preying on magic folk, and it appears that Mona is his next target. And in an embattled city suddenly bereft of wizards, the assassin may be the least of Mona’s worries…
What did I think of it:
I've been curious about the books of Kingfisher for awhile, so decided to give this one a try.
And what a fun read!
This book is both humorous and suspenseful. Mona is an unlikely hero, but circumstances force her into action. Either she finds out what's going on, and stops it, or she might end up dead.
I loved the writing style and the characters. Special kudos to Bob, the sourdough starter! Once I started on the book I was soon hooked and eager to find out where the story would lead. The magic system in was fun an original, I had a great time seeing Mona figure out her bread magic.
All in all a wonderful read. You bet I'll read more books by Kingfisher.
Why should you read it:
It's a really fun Fantasy read.
buy from amazon
Posted by Sullivan McPig at 13:00