In the Air Tonight - Book Review by Voodoo Bride 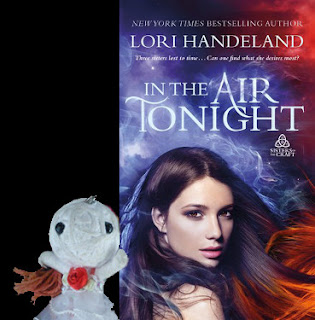 In the Air Tonight (Sisters of the Craft #1)
by Lori Handeland
What is it about:
Four centuries ago, in a small Scottish village, three baby girls escaped the wrath of a witch hunter. Today, one young woman will learn about her secret history, her heart's destiny, and the sisters she never knew she had...
With her blue-black hair and dark eyes, Raye Larsen has never fit in with the Scandinavian community of New Bergin, Wisconsin. Being adopted is part of the reason she feels like an outsider, but what really sets Raye apart is her ability to see dead people. Everywhere.
She’s learned to keep her visions to herself . . . until she stumbles onto the ghost of a murder victim who needs Raye’s help. Enter Bobby Doucet, a distractingly handsome homicide detective who has been tracking a killer all the way from New Orleans. Could this be the break in his case he’s been looking for all along?
Meanwhile, the deeper Raye gets involved with the case—and with Bobby—the closer she comes to unlocking the mystery of her own origins. What she discovers about herself could destroy everything she knows . . . and everyone she loves. Is finding the truth worth the risk?
What did Voodoo Bride think of it:
This is a fun read.
I really liked Raye, and the way people treated her reminded me of why I do not like living in small towns and villages.
Then someone or something starts hunting her and things get suspenseful. Enter Bobby Doucet, a yummy detective who is more than willing to protect Raye. I was eager to find where things would lead and I was invested in both the action story and the romance.
This being a Paranormal Romance it has a satisfying conclusion, but there's two more books that are about Raye's sisters, so I'm definitely going to read those as well.
Why should you read it:
It's has perfect mix of paranormal suspense and romance.
buy from Amazon
Posted by Sullivan McPig at 13:00