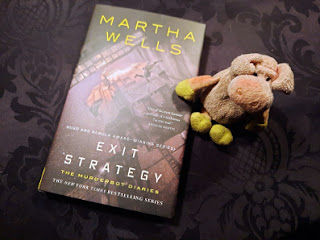 Exit Strategy (The Murderbot Diaries #4)
by Martha Wells
What is it about:
Murderbot wasn’t programmed to care. So, its decision to help the only human who ever showed it respect must be a system glitch, right?
Having traveled the width of the galaxy to unearth details of its own murderous transgressions, as well as those of the GrayCris Corporation, Murderbot is heading home to help Dr. Mensah—its former owner (protector? friend?)—submit evidence that could prevent GrayCris from destroying more colonists in its never-ending quest for profit.
But who’s going to believe a SecUnit gone rogue?
And what will become of it when it’s caught?
What did I think of it:
Until I read this novella Artificial Condition was my favorite of these novellas (ART!), but now it will have to share first place with Exit Strategy.
Murderbot has answers to several of its questions and is on its way to Dr. Mensah, who bought Murderbot from its corporation and thereby giving Murderbot its freedom. But things have happened while Murderbot was gone, and soon it is in the middle of dangerous politics and games.
Once again there is lots of action while Murderbot tries to save the day. There are returning characters as well, and I loved catching up with them. I read this novella in one sitting, because it was just too suspenseful to put down. I needed to know if all my favorite characters would survive.
All in all another awesome read. I'm hooked on this series!
Why should you read it:
It's a really cool SF novella
buy from amazon
Posted by Sullivan McPig at 13:00