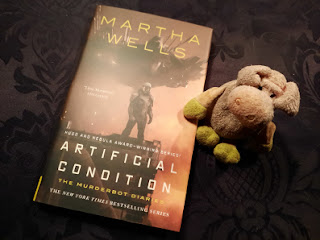 Artificial Condition (The Murderbot Diaries #2)
by Martha Wells
What is it about:
It has a dark past – one in which a number of humans were killed. A past that caused it to christen itself “Murderbot”. But it has only vague memories of the massacre that spawned that title, and it wants to know more.
Teaming up with a Research Transport vessel named ART (you don’t want to know what the “A” stands for), Murderbot heads to the mining facility where it went rogue.
What it discovers will forever change the way it thinks…
What did I think of it:
This is another Hugo read. I wasn't sure if I should read it as it's book 2 in a series, but then Jeffe told me she started it and didn't feel lost even though she hadn't read book 1, so I decided to give it a try as well.
And this is a really fun read. I especially loved ART and the interaction between ART and Murderbot. The two of them really have a unique and cool way of looking at things. I thought Wells did a great job at making them sound and act other than human.
The story itself delves into the past of Murderbot and also is about Murderbot trying to find out where it/they belong and how they want to be.
All in all a very cool novella. I think I'll go back and read the first one as well.
Why should you read it:
It's a very cool SF novella.
Notes on rereading:
Although this book is also perfectly readable on its own, I must say it's a more solid read if you also know what happened in the first book. I got a better grip on what's going on in Murderbot's head and was more invested. I still totally love ART!
Buy from Amazon
Posted by Sullivan McPig at 13:00