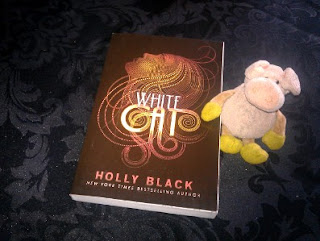 What is it about:
Cassel comes from a family of Curse Workers - people who have the power to change your emotions, your memories, your luck, by the slightest touch of their hands. And since curse work is illegal, they're all criminals. Many become mobsters and con artists. But not Cassel. He hasn't got magic, so he's an outsider, the straight kid in a crooked family. You just have to ignore one small detail - he killed his best friend, Lila, three years ago.

Cassel has carefully built up a facade of normalcy, blending into the crowd. But his facade starts to crumble when he finds himself sleepwalking, propelled into the night by terrifying dreams about a white cat that wants to tell him something. He's noticing other disturbing things too, including the strange behavior of his two brothers. They are keeping secrets from him. As Cassel begins to suspect he's part of a huge con game, he must unravel his past and his memories. To find out the truth, Cassel will have to out-con the conmen.

What did I think of it:
This was a really cool read.

Back when this book was first released I heard others rave about it, but somehow it didn't speak enough to me to pick it up. Cut to a few years later and this piggy decided to give White Cat a chance after all.

And I'm almost sorry I didn't pick it up sooner.

This book surprised me in a pleasant way. It's original and intriguing and I didn't even mind the present tense most of the time. I really liked the sneakpeek into the life of conmen I must confess. The story was really suspenseful and took me by surprise a couple of times.

Cassel is a nice enough character, but I must say I was more intrigued by the characters around him and by what was going on, although I have to confess I grew to like Cassel more and more along the way.

The way this book ends it can be read as a standalone, but it also opens a door to the next book, promising even more suspense and action and you can bet I'll be getting my trotters on it soon.

Why should you read it:
It's a really intriguing Paranormal Young Adult read.

I haven't read about this book before, but it sounds good. I really like things with con artists.