Blood of the Rose - A Book Review by Voodoo Bride 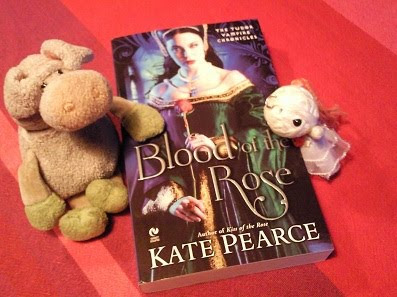 Blood of the Rose (Tudor Vampire Chronicles #2) by Kate Pearce

What is it about:
When vampire slayer Rosalind Llewellyn had to join forces with her enemy Christopher Ellis to defeat a rogue vampire threatening Henry VIII, their alliance led to a surprising passion. Reunited after a year's separation, they now face a new threat that could destroy their last chance at happiness.

What did Voodoo Bride think of it:
My main concern about the first book in this series was that the romance was very angsty and that the heroine and hero both acted very stubborn. Nothing much has changed when it comes to that in book two I'm afraid. Rosalind and Christopher kept me frustrated about their romance throughout Blood of the Rose as well. There were some less angsty romantic scenes, but far too few in my opinion.

The story and setting on the other hand are really cool and had me totally engrossed until the storyline I was anticipating to be continued in future books was suddenly killed off! I can understand why Pearce made this choice, but I was not happy!

Chances of me continuing this series:
The setting, writing and the characters are all very good and apart from the things I mentioned here I did enjoy the book, so I might give the next book (which starts a new story with different lead characters) a chance to see if this time I will enjoy both the action and the romance.

Why should you read it:
Tudors and Vampires!