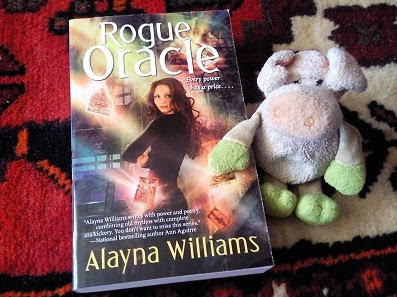 What is it about:
Tara Sheridan is the best criminal profiler around—and the most unconventional. Trained as a forensic psychologist, Tara also specializes in Tarot card reading. But she doesn’t need her divination skills to realize that the new assignment from her friend and sometime lover, Agent Harry Li, is a dangerous proposition in every way.

Former Cold War operatives, all linked to a top-secret operation tracking the disposal of nuclear weapons in Russia, are disappearing. There are no bodies, and no clues to their whereabouts. Harry suspects a conspiracy to sell arms to the highest bidder. The cards—and Tara’s increasingly ominous dreams—suggest something darker. Even as Tara sorts through her feelings for Harry and her fractured relationship with the mysterious order known as Delphi’s Daughters, a killer is growing more ruthless by the day. And a nightmare that began decades ago in Chernobyl will reach a terrifying endgame that not even Tara could have foreseen. . . .

What did I think of it:
I absolutely love Dark Oracle, the first book in this series, so I was more than eager to read Rogue Oracle. And let me say:

Tara and Harry both have some serious fights on their hands in this book and I must confess they had me worried about their safety and happiness more than once. Even though the overall tone of the story is grim it never crosses the line that makes a story too angsty and desperate for me, instead it drew me in just as tightly as the first book did, cheering on Tara and Harry and cursing those who make their lives difficult. Rogue Oracle is a more than worthy sequel to Dark Oracle and I can only hope there will be more books in this series as I am now officially in love with Tara.

Why should you read it:
It's a totally awesome, intense Urban Fantasy read.

Aewsome review! i have this one on my shelf.

YES! Totally agree! I sure hope there's more books in this series! =D

You've got me totally excited about reading this now! Thanks for stopping by my place earlier! :)

I'm so thrilled that you enjoyed it! *Jumps up and down* :-D