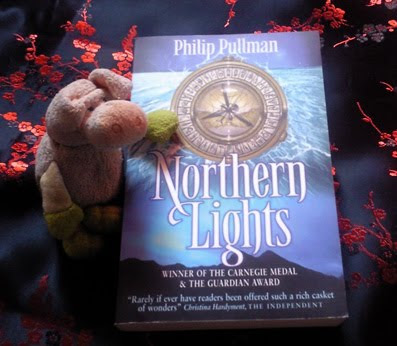 What is it about:
In a landmark epic of fantasy and storytelling, Philip Pullman invites readers into a world as convincing and thoroughly realized as Narnia, Earthsea, or Redwall. Here lives an orphaned ward named Lyra Belacqua, whose carefree life among the scholars at Oxford's Jordan College is shattered by the arrival of two powerful visitors. First, her fearsome uncle, Lord Asriel, appears with evidence of mystery and danger in the far North, including photographs of a mysterious celestial phenomenon called Dust and the dim outline of a city suspended in the Aurora Borealis that he suspects is part of an alternate universe. He leaves Lyra in the care of Mrs. Coulter, an enigmatic scholar and explorer who offers to give Lyra the attention her uncle has long refused her. In this multilayered narrative, however, nothing is as it seems. Lyra sets out for the top of the world in search of her kidnapped playmate, Roger, bearing a rare truth-telling instrument, the compass of the title. All around her children are disappearing, victims of so-called "Gobblers", and being used as subjects in terrible experiments that separate humans from their daemons, creatures that reflect each person's inner being. And somehow, both Lord Asriel and Mrs. Coulter are involved.

What did I think of it:
A really great read! This book is the first in a trilogy, but can easily be read as a stand alone if you don't mind an open ending. Lyra is a fun and strong heroine who I loved right from the start of the story. The worldbuilding in this book is excellent and Pullman manages to create a cast of unforgettable characters to fill this world. My favourite character is Iorek Byrnison the armoured bear. Yes: this book has talking animals! The story is thought provoking, suspenseful, filled with action and emotion and totally cool. It is made into a movie, but the movie doesn't even come close in capturing the heart of this book.

Why should you read it:
It's got armoured bears!

I know someone who would write: "It's got armoured, talking, vodka-drinking bears!"

(But I never knew if he was joking or if the bears really do drink vodka!)

I'm not sure about the other bears, but Iorek does anyway!