"Worth Your Weight in a 'Gator Battle Award" 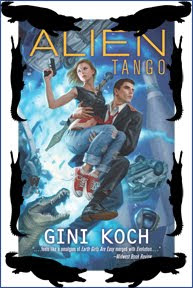 Just look what a cool award I got!!

Both Gini Koch and Becky from Bibliognome awarded me with the "Worth Your Weight in a 'Gator Battle Award"!

Here is what it is about:

Congratulations, you’ve won the honor of being Worth Your Weight in a ‘Gator Battle!

The award was created in honor of (at least according to them) the real stars from “Alien Tango”. No, not Katherine “Kitty” Katt or Jeff Martini. Alliflash and Gigantagator, Alligators Extraordinaire!

The “Worth Your Weight in a ‘Gator Battle Award” is only given to the wily, the brave, and the cheeky, so get down with your bad self, you’re deemed worthy to run with the A-C’s!

Now you get to spread the awesome by nominating other bloggers who would also be worth their weight in a ‘gator battle. Battling ‘gators is not for sissies or wimps -- only the strong survive -- so choose wisely!

0.Slap the graphic on your blog post.
0.Give link props to the person who gave you the award (don’t rile a ‘gator fighter -- it’s dangerous).
0.Spread the awesome and nominate five (5) other bloggers who you think will be worth their weight in a ‘gator battle.
0.Let the recipients know they’ve won this honor on their blogs.
0.Last but not least, shoot Gini Koch an email at gini@ginikoch.com and let her know you’re worthy of running with the A-C’s (put “Worth My Weight” in the subject line!) by sharing that you’ve been nominated and telling her which other bloggers you nominated, and she’ll enter you into the “Worth Your Weight” Contest. Keep reading to find out more details and what the loot is below.

Of course, you can choose to ignore your awesomeness, but then you’ll never have a chance to nab your own A-C or win the loot. And you know you want both.

Worth Your Weight Contest

Are you worth your weight in a Gator Battle?

Let’s hope you are, because we’ve got a Battle Royale going on right now to see which blogger is the one who can best the ‘gators (and, at least per them, the true stars) from “Alien Tango” -- Alliflash and Gigantagator.

Why do you want to win? Well, we’ll give you not one, not two, but FOUR good reasons! 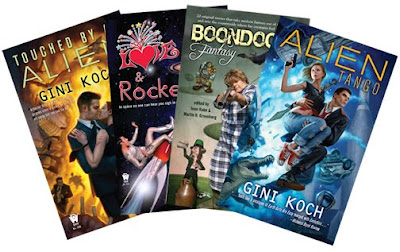 That’s right. Whoever wins the ‘Gator Battle Royale will win a signed and personalized copy of “Touched by an Alien”, “Love and Rockets”, “Boondocks Fantasy”, AND “Alien Tango.” Yes, really, four books.

How can you pass this battle up? That’s right -- you can’t! So…get ready to RUMBLE!

But what about those who fight mightily, but don’t win it all?

Glad you asked! There will be four consolation prizes!

Wow! That is some cool award and contest!
So now for 5 bloggers to bestow this award on!

These ladies are all awesome and certainly worth their weight in a Gator Battle!
If you haven't yet, be sure to check out their blogs to see so for yourself!

if you didn't already have this i'd send it your way too, because you rockkkk, sullivan!
thanks for my gator!