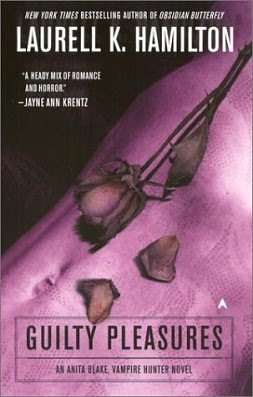 What is it about:
Anita Blake may be small and young, but vampires call her the Executioner. Anita is a necromancer and vampire hunter in a time when vampires are protected by law--as long as they don't get too nasty. Now someone's killing innocent vampires and Anita agrees--with a bit of vampiric arm-twisting--to help figure out who and why.
Trust is a luxury Anita can't afford when her allies aren't human. The city's most powerful vampire, Nikolaos, is 1,000 years old and looks like a 10-year-old girl. The second most powerful vampire, Jean-Claude, is interested in more than just Anita's professional talents, but the feisty necromancer isn't playing along--yet.

What did I think of it:
Hamilton's writing and world building are solid, her characters interesting and the story is quite good. Still I didn't much care for this book and that has to do with the lead character: Anita Blake.

I really didn't like her! Now why is that you ask?
As far as I could make out from this story and the background info that is given in this book Anita Blake is a bigot. She hates all vampires for something that only a few rotten apples did. At the same time she herself does things in her role as necromancer that had me wincing in sympathy with the ghosts she encounters. I really couldn't live with these character traits and I found myself cheering on the bad guys instead of Anita.
All in all I do not think I will read other books in this series.

Why should you read it:
It's a decent vampire story and maybe you will like Anita better than I do.

You know, I didn't like the main character either. I liked all the supporting cast, but she bugged me... both with her biases and with some of her speech patterns... I seem to recall she had an obnoxious way of phrasing or repeating things (I can't remember exactly... it's been many years since I read this).

I have to say though... unless you were reading this book for the sex scenes... there is no point in reading this series past the 5th book. After that it goes downhill... Anita doesn't even really do necromancy anymore (until many books later) and everything is about how many times/in how many ways/with how many people can Anita "do it". It was really disappointing to see the series drop off in that way.

Hmmm... sounds like another good reason not to continue this series.

I liked the early books in this series. I thought it kept getting better and better--until it turned into pr0n around book 5 or 6. I stayed with it until NARCISSUS IN CHAINS and then I was done.

Is your adverse reaction to the lead character the reason you're not posing in a photograph with the book, Sully?

I have to confess I disliked Anita so much I gave the book to a hospital library before taking a picture of me with the book. o_0

LOL!!! I hope it doesn't make the poor patients even sicker! ;-)