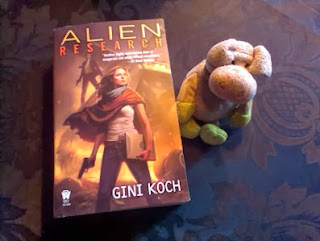 What is it about:
When rumors of a new super-drug surface, the FBI comes to Jeff and Kitty Katt-Martini for help. It becomes quickly apparent that the drug is merely the tip of a deadly iceberg and a much more insidious plan is underway involving Titan Security, Gaultier Enterprises, and YatesCorp.

What did I think of it:
I haven't come across a book in this series I didn't like yet, but there have been some books that I loved more than others. The previous book in this series was fun, but a bit confusing at times. There was a lot of talking and politics, and even though I really liked the book, I found myself secretly missing the action I got used to in the other books in this series.

So I was curious when I started Alien Research. Would it be like Alien Diplomacy and focus on story lines that didn't need action or would it be more like Alien Proliferation, which had action abound?

I'm glad to say this book is an action packed adventure that actually came close to equaling my favorite books in this series. There's a lot going on as always, and you have to keep paying attention, but luckily there were fewer characters to keep apart from each other than in Alien Diplomacy, so I could easily keep up with things.

There are some very interesting developments and revelations, and a few new and very intriguing characters get introduced (I'm already in love with one of them, I will confess). There's lots of suspense, intrigue and even heartbreak as well. I was shocked by some of the events, and had to blink away a few tears.

All in all I loved this book: it's fun, intense and full of surprises. I hope Gini Koch keeps them coming, because this series keeps on entertaining me. And certain events in this book make me curious what will be next as well.

Why should you read it:
It's a great SciFi adventure.

Dunno if you are thinking of that new character or another...but I sure liked..that character too ;)

I'm not familiar with the series, but it sounds right up my alley. Adding it to my reading pile:)

Mine is on it's way. I have to admit I've not read Alien diplomacy, so I'm somewhat behind. It'll be high in my TBR and from next week on I have 2 weeks vacation!

I have book 3 and I really need to read it!

Yeah, glad you loved it too. Are you thinking of the new "sister"?

It's a certain male character