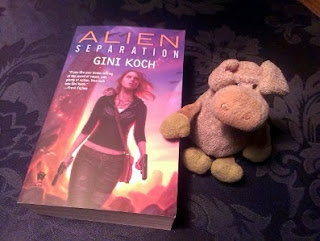 What is it about:
The Mastermind has finally been identified, but before Jeff and Kitty Katt-Martini can take him down, they, their daughter, Jamie, Charles Reynolds, Paul Gower, Christopher White, and several others are zapped out of their solar system and into another. Landing them on an alien planet – and not together...

What did I think of it:
This is yet another awesome addition to a great series.

Kitty has barely recovered from her trip to an alternate universe when she and several of her friends are zapped to an unfamiliar alien planet.

And the creatures they encounter there are so cool!

I loved the new planet that's introduced in this book, and the new animals and other creatures Kitty encounters there. Gini Koch manages to describe this world and its inhabitants so vividly I could easily picture it all. (I even suspect she thought of me when creating this world: pig-like creatures!)

There's lots going on: both on this new planet, as in other places. With all the things happening and with the introduction of new characters, I had to keep paying attention to keep up with the story. There was lots of action, funny situations, suspense, and Kitty saving the day.

I will say again: if you haven't started on this series yet, get reading! I for one am already looking forward to the next book, because I can't get enough of Kitty. This book (and series) is fun, funny, action-packed and more than entertaining!

Why should you read it:
It's SciFi awesomeness!

i want! but i'm getting really behind in this series so i should put it higher in my list as soon as i get more time
thank you for the reminder