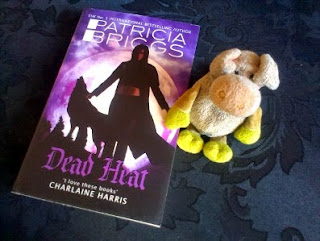 What is it about:
For once, mated werewolves Charles and Anna are not traveling because of Charles’s role as his father’s enforcer. This time, their trip to Arizona is purely personal, as Charles plans to buy Anna a horse for her birthday. Or at least it starts out that way...

Charles and Anna soon discover that a dangerous Fae being is on the loose, replacing human children with simulacrums. The Fae’s cold war with humanity is about to heat up—and Charles and Anna are in the cross fire.

What did I think of it:
Is it just me, or does anyone else think it's weird how often Charles runs into ex lovers as well?

I mean: He's constantly described as inspiring fear in others, being a lone wolf until he met Anna. Several times it's mentioned how he keeps a distance from others. Still, after 4 books and one novella I'm counting 3 old flames.

That being said: I loved this book.

The story is suspenseful and intriguing. I love how Anna and Charles both play to their strengths. There are some really intense scenes, both to do with their investigation and with their friends.

There was a bit too much horse stuff at times for those readers who aren't that much into horses, but only once did I catch myself skimming a horse scene, most were just short enough to get through without getting bored.

Luckily there were enough other things going on, and I very much enjoyed learning yet a bit more about Charles' past, and about the Fae.

The book ends with some things resolved, but leaves open a lot of things that will have consequences not just for Anna and Charles, but for everyone.

I'm looking forward to the next book to see how things will develop from here.

Why should you read it:
It's a compelling Urban Fantasy read.