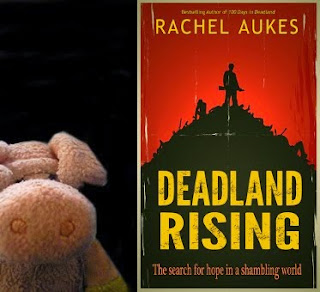 What is it about:
The conclusion of the critically acclaimed DEADLAND SAGA:

Winter has arrived.
It has been nearly one year since the zombie hordes claimed the world. As the plague eats away at its victims’ bodies, the Fox survivors search for a safe place to rebuild what they have lost. But a dangerous new threat has risen, hunting them from every direction. To survive, Cash, Clutch, and their small band of refugees must put their faith in a group of strangers and a new government with radical plans. It will take all of the Fox survivors’ strength and courage to endure in this barren, hostile world. Even that might not be enough.

(Deadland Rising is a journey through Dante Alighieri's “Paradiso”, the classic tale on the seven virtues… zombie apocalypse style!)

What did I think of it:
I loved the first two books in this trilogy so much, I've been stalking Rachel Aukes' website for news about the final book. So you can imagine my excitement when she sent me an early digital copy for review.

And this book was so worth the wait!

There's less zombies in this book than in the other books, but there's more than enough danger to make this a suspenseful and intense read.

The plague and the zombies have left the survivors robbed of the conveniences they were used to, and the lack of a structured society makes the world a dangerous place. Cash and Clutch face important decisions. Who should they trust? How do they deal with the problems thrown their way? And how are they going to rebuild their life?

I was totally captured by this book from the start and read it almost in one sitting (dinner is overrated).

The way Aukes writes this story makes it feel real, and Cash and Clutch are easy to root for. That doesn't mean they're perfect, they have their flaws and emotional scars, but they're trying to make the right choices, and they care for each other and their friends.

As in the previous books Aukes shows that zombies may be dangerous, but it's humans who can be more deadly and rotten. I like how Aukes shows how different people can react to stress, leadership and danger. How it makes some people fight to hold on to what they know is right, and how others turn to their base urges.

As for this book being a re-imagining of Dante Alighieri's Paradiso: for those familiar with this work, it will be fun to find all the comparisons and little Easter eggs, but you don't have to know anything about Paradiso to enjoy Deadland Rising.

All in all this book is a fitting and more than worthy conclusion to an awesome trilogy, and you bet I'll be getting the paperback, so I have all three books to hug and reread as often as I want.

I am really glad this book delivered and you loved it so much. Not for me, as you already know, since you typed the Z word ...