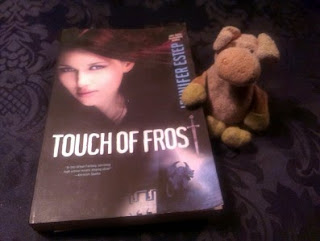 What is it about:
My name is Gwen Frost, and I go to Mythos Academy; a school of myths, magic and warrior whiz kids, where even the lowliest geek knows how to chop off somebody's head with a sword and Logan Quinn, the hottest Spartan guy in school, also happens to be the deadliest. But lately, things have been weird, even for Mythos. First, mean girl Jasmine Ashton was murdered in the Library of Antiquities. Then, someone stole the Bowl of Tears, a magical artifact that can be used to bring about the second Chaos War. You know, death, destruction and lots of other bad, bad things. Freaky stuff like this goes on all the time at Mythos, but I'm determined to find out who killed Jasmine and why; especially since I should have been the one who died...

What did I think of it:
I got a soft spot for stories that take place at a boarding school (I blame Enid Blyton!), so I really wanted to try this series. I was lucky enough to get the first three books from Melliane.

And this first book is a very enjoyable read.

I liked the world building: Amazons, Spartans, Valkyrie and other mythological warrior teens being trained to fight and use magic so they can defend the world from evil. And the a fore mentioned soft spot for boarding school stories made that I was hooked from the start.

The mysterious death that Gwen is investigating was a nice way to show the reader around on the campus and get to know the school and characters. The investigation and mystery weren't that suspenseful (apart from some cool action scenes), but very entertaining.

That annoyance aside (and the fact that once again Loki is the bad guy), this was a really nice read, and I will most certainly pick up the next book to see what kind of trouble Gwen will get herself into next.

Why should you read it:
It's a very entertaining Paranormal YA read

oh you're fast with my books! You'll see it's a really nice series.

I am glad you enjoy this series Sullivan! I have to finish it, two more books to go I think, but perhaps I will start with the first one again.