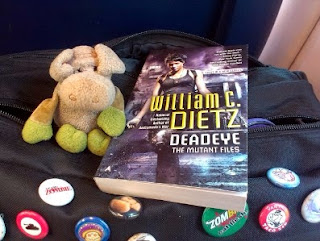 What is it about:
In the year 2038, an act of bioengineered terrorism decimated humanity. Those who survived were either completely unaffected or developed horrible mutations. Across the globe, nations are now divided between areas populated by “norms” and lands run by “mutants”...

Detective Cassandra Lee of Los Angeles’s Special Investigative Section has built a fierce reputation taking down some of the city’s most notorious criminals. But the serial cop killer known as Bonebreaker—who murdered Lee’s father—is still at large. Officially, she’s too personally involved to work on the Bonebreaker case. Unofficially, she’s going to hunt him to the ends of the earth.

In the meantime, duty calls when the daughter of Bishop Screed, head of the Church of Human Purity, is kidnapped by mutants and taken into the red zone to be used for breeding. Assigned to rescue her, Lee must trust her new partner—mutant lawman Deputy Ras Omo—to guide her not only through the unfamiliar territory but through the prejudicial divisions between mutants and norms...

What did I think of it:
When I read the blurb of this book and saw it had mutants, I had to give it a try.

And this is a cool read.

The mutants are all mostly covered up, and the mutations described weren't the kind I had hoped for, but overall I liked the world building. It felt believable that people would create separate areas where mutants and 'normal' people live. especially as some mutants are contagious.

Cassandra Lee however is a bit too perfect. She's tough as nails, a crack shot, and all the guys drool over her perfect butt beauty. And there's some other things about Cassandra that annoyed me as well. But some casual remarks in the story, make me think that Dietz isn't too familiar with women. Because according to Cassandra Lee all women like matching cabinets, and are just dying to give old, messy kitchens a make over.
Yeah... Moving on.

Ras Omo is an interesting and cool character, but has an unfortunate name, especially as Cassandra and Ras keep calling each other by their last name. Omo is the name of a leading brand laundry detergent over here. So I will confess his name made me cringe every time it was mentioned.

All grumbles out of the way:

The story is really cool, and full of action and suspense. I kept reading to find out if Lee and Omo (*cringe* OK, I will just keep calling him Ras from now on.) would solve their case, and if Lee would find out more about the Bonebreaker.

The case Lee and Ras are trying to crack gets its resolution in this book, but the Bonebreaker seems like it will become the glue to connect the books in this series. I think I will give the next book in this series a try to see what happens next. I'm also curious if Lee and Ras will get to work together again, or if Perfect 10 Lee will get another partner who can drool over her in the next book.

All in all this is a cool read, and I even might give other books by Dietz a try.


Why should you read it:
It's a cool SciFi/Futuristic read.