Today we're proud to participate in the reveal of the new cover of Petals and Thorns by Jeffe Kennedy.

Below you can have a look at the gorgeous new cover (be sure to click on it for a bigger, better view), read about the book and more, and enter a giveaway for a digital copy of the book. 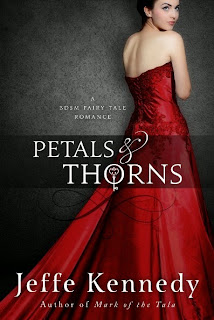 Petals and Thorns
by Jeffe Kennedy

In exchange for her father’s life, Amarantha agrees to marry the dreadful Beast and be his wife for seven days. Though the Beast cannot take Amarantha’s virginity unless she begs him to, he can and does take her in every other way. From the moment they are alone together, the Beast relentlessly strips Amarantha of all her resistance.

If Amarantha can resist her cloaked and terrifying husband, she gains his entire fortune and will be allowed to return to her family and a normal life. But the Beast seduces her at every turn, exposing, binding, tormenting, and pleasuring Amarantha until she no longer knows her own deepest desires.

Increasingly desperate to break the curse that chains his humanity, the Beast drives Amarantha past every boundary. But her desire for a normal life may jeopardize the love that will save them both.

If that gorgeous new cover isn't enough to buy it right now, here's what Voodoo Bride thinks of Petals and Thorns:

I love the story of Beauty and the Beast, but always thought that for a story featuring a Beast it was too sweet and lacked a certain edge. This retelling fixes that problem once and for all.

I really enjoyed it and can recommend this story to anyone who likes their Beast beastly, not only in looks, but in certain appetites as well. 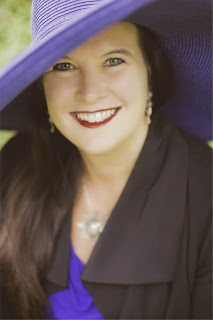 Jeffe Kennedy is an award-winning author whose works include non-fiction, poetry, short fiction, and novels. She has been a Ucross Foundation Fellow, received the Wyoming Arts Council Fellowship for Poetry, and was awarded a Frank Nelson Doubleday Memorial Award. Her essays have appeared in many publications, including Redbook.

Jeffe can be found online at her website: JeffeKennedy.com, every Sunday at the popular Word Whores blog, on Facebook, and pretty much constantly on Twitter @jeffekennedy. She is represented by Connor Goldsmith of Fuse Literary.

Jeffe Kennedy is giving away a copy of Petals and Thorns to 4 lucky winners tour wide.
(winners can chose between epub, mobi, or PDF)

Giveaway rules:
- open internationally
- use raffle copter to enter
- open to anyone above 18, and who is legally allowed to enter

Now I wanna know how the old one looked

There have been two other covers, Blodeuedd.:-)

Beautiful. And I love the B&B trope. Thanks Carien for this giveaway.