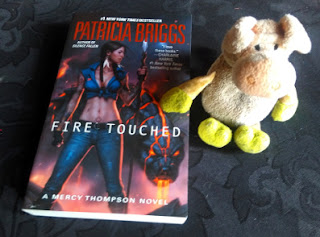 What is it about:
Tensions between the fae and humans are coming to a head. And when coyote shapeshifter Mercy and her Alpha werewolf mate, Adam, are called upon to stop a rampaging troll, they find themselves with something that could be used to make the fae back down and forestall out-and-out war: a human child stolen long ago by the fae.

Defying the most powerful werewolf in the country, the humans, and the fae, Mercy, Adam, and their pack choose to protect the boy no matter what the cost. But who will protect them from a boy who is fire touched?

What did I think of it:
I pre-ordered the US paperback instead of getting the hardcover when the book released in 2016. Somehow I never got to reading it when it arrived in February last year. With the US paperback of Silence Fallen releasing this month I decided to catch up.

And this is a great read.

There are books I love more in this series, but luckily the drama that was in the previous book wasn't repeated. There even were some lines drawn that make future drama even less likely, so I was happy with that.

The story felt a bit easy compared to some of the other books, but still very enjoyable. I liked seeing more of Zee, and of two characters I previously encountered in a novella. One of the wolves got a bit more screentime, and I hope to see more of him in the next book.

All in all a great book in an even greater series. I'm looking forward to reading Silence Fallen.

Why should you read it:
It's a cool Urban Fantasy read.