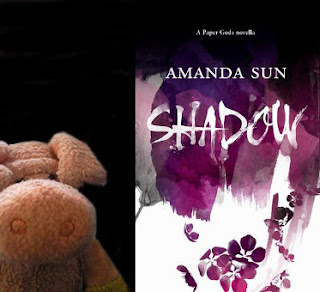 What is it about:
Meet two teens whose worlds are about to change forever in this paranormal Young Adult novella, a prequel to Ink by Amanda Sun…

Katie Greene’s worst nightmare comes true when her mother dies, and she’s devastated to learn that she will have to leave the only home she’s ever known. Desperate to find where she belongs, she must decide if she has what it takes to start a new life across the ocean.

For Yuu Tomohiro, every day is a nightmare. He struggles to control his strange ability, and keeps everyone at a distance so they won’t get hurt—even his girlfriend, Myu. At night, a shadow haunts his dreams, and a mysterious woman torments him with omens of death and destruction. But these haunting premonitions are only the beginning…

What did I think of it:
It recently occurred to me I never read the novellas that accompany the Paper Gods trilogy. As I really enjoyed the trilogy I decided to remedy that.

And this prequel is a really enjoyable read as well.

I'll be reading the other novella soon.

Why should you read it:
For fans of the trilogy this is a nice extra, while it's a great starting point for people who want to give this series a try.