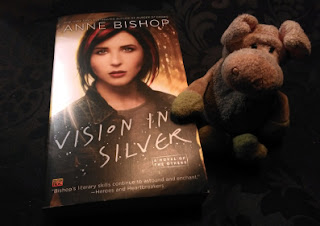 Vision in Silver (The Others #3)
by Anne Bishop

What is it about:
The Others freed the cassandra sangue to protect the blood prophets from exploitation, not realizing their actions would have dire consequences. Now the fragile seers are in greater danger than ever before; both from their own weaknesses and from those who seek to control their divinations for wicked purposes. In desperate need of answers, Simon Wolfgard, a shape-shifter leader among the Others, has no choice but to enlist blood prophet Meg Corbyn’s help, regardless of the risks she faces by aiding him.

Meg is still deep in the throes of her addiction to the euphoria she feels when she cuts and speaks prophecy. She knows each slice of her blade tempts death. But Others and humans alike need answers, and her visions may be Simon’s only hope of ending the conflict.

For the shadows of war are deepening across the Atlantik, and the prejudice of a fanatic faction is threatening to bring the battle right to Meg and Simon’s doorstep…

What did I think of it:
I pre-ordered this paperback in 2015, but once it arrived in February 2016 it somehow ended up being overlooked until recently.

This is a cool read. Meg seemed less Mary Sue-ish in this book, but that may be because the focus was less on her this time. I liked how the focus was more on the normal humans and how some of them are trying their best to work with the Others, while a lot of humans are putting a strain on the already delicate relationship between humans and Others.

I like seeing more of some of my favorite characters. Others got a bit more screentime, and some new characters got introduced as well.

Even though the main plot felt a bit drawn out, and there were some side storylines that cluttered things up, I very much enjoyed this book and will pick up the next book one of these days.

Why should you read it:
It's an entertaining UF read.

i love this series!but it gets darker with each book