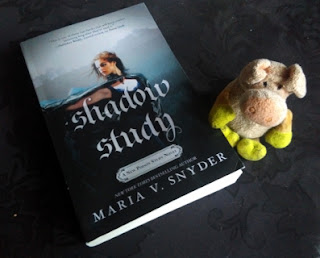 What is it about:
Once, only her own life hung in the balance…

When Yelena was a poison taster, her life was simpler. She survived to become a vital part of the balance of power between rival countries Ixia and Sitia.

Now she uses her magic to keep the peace in both lands—and protect her relationship with Valek.
Suddenly, though, dissent is rising. And Valek’s job—and his life—are in danger.
As Yelena tries to uncover her enemies, she faces a new challenge: her magic is blocked.And now she must find a way to keep not only herself but all that she holds dear alive.

What did I think of it:
I really enjoyed the Study trilogy, but was a bit hesitant to pick up this book because I was afraid something similar to what happened in Spy Glass would happen (for this same reason I also haven't read Taste of Darkness yet). After hunting for spoilers I finally decided to get this book. It took me almost a year to actually pick it up and read it.

And this is a really enjoyable book.

It would have been even better in my opinion if one of the three viewpoint characters had been left out though. There's Yelena of course, and I really enjoyed her storyline, which is suspenseful. Then there was Valek, and his storyline was even better. I loved getting to know more about how Valek became the person he is and how he came to work for the Commander. There are hints in his storyline of more intriguing event waiting to happen in the next two books.

And then there was Janco...

Janco was never one of my favorite characters, and I usually only could tolerate him because he was a side character and had Ari as a counterweight to his clownish behavior (they're like a Fantasy version of Laurel and Hardy). Here he's a viewpoint character and at least for me a really annoying one. I will confess I skimmed some of the chapters devoted to Janco to get back to Yelena and Valek as soon as possible.

Skimming Janco's chapters did make that when the storylines came together I was a little confused, but luckily not for long. All in all this was mostly an enjoyable read and I will most probably read the next two books as well. Although I might skim again if Janco stays a viewpoint character.

I might even be brave enough to pick up Taste of Darkness one of these days.

Why should you read it:
It's an enjoyable Fantasy read.