A Princess in Theory - Book Review by Voodoo Bride 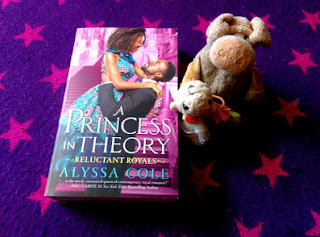 A Princess in Theory (Reluctant Royals #1)
by Alyssa Cole

What is it about:
Between grad school and multiple jobs, Naledi Smith doesn’t have time for fairy tales…or patience for the constant e-mails claiming she’s betrothed to an African prince. Sure. Right. Delete! As a former foster kid, she’s learned that the only things she can depend on are herself and the scientific method, and a silly e-mail won’t convince her otherwise.

Prince Thabiso is the sole heir to the throne of Thesolo, shouldering the hopes of his parents and his people. At the top of their list? His marriage. Ever dutiful, he tracks down his missing betrothed. When Naledi mistakes the prince for a pauper, Thabiso can’t resist the chance to experience life—and love—without the burden of his crown.

The chemistry between them is instant and irresistible, and flirty friendship quickly evolves into passionate nights. But when the truth is revealed, can a princess in theory become a princess ever after?

What did Voodoo Bride think of it:
In my search for fun Contemporary Romances this cover drew my eye, and the blurb sounded too good to resist.

And this is indeed a very fun Contemporary Romance.

I really liked Naledi and could only too well understand why she deletes the emails telling her she's engaged to an African prince. Then Thabiso shows up at the restaurant where she works part-time and she mistakes him for the new waiter.

Thabiso is a really great guy, but he is bad at handling life and love. His attempts to get to know Naledi and to tell her who he is are terrible, but also adorable. I could understand why Naledi, who's usually very guarded, opens up for him. I had a great time reading how the two of them fell in love.

Some of the things happening in this book where predictable of course, but I didn't mind. I was having fun with this book, and that can be more important than originality.

The one thing that didn't work for me was a storyline near the end of the book that was a bit out there in my opinion. Again it was easy to see what was going on, but at the same time it felt unbelievable. That aside though, I very much enjoyed this romance and will see what other books Alyssa Cole has written.

Why should you read it:
It's a fun and enjoyable Contemporary Romance.