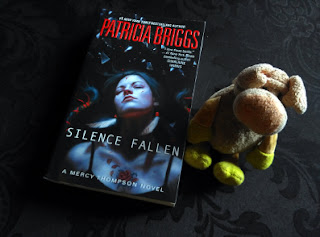 What is it about:
Attacked and abducted in her home territory, Mercy finds herself in the clutches of the most powerful vampire in the world, taken as a weapon to use against alpha werewolf Adam and the ruler of the Tri-Cities vampires. In coyote form, Mercy escapes only to find herself without money, without clothing, and alone in the heart of Europe...

Unable to contact Adam and the rest of the pack, Mercy has allies to find and enemies to fight, and she needs to figure out which is which. Ancient powers stir, and Mercy must be her agile best to avoid causing a war between vampires and werewolves, and between werewolves and werewolves. And in the heart of the ancient city of Prague, old ghosts rise...

What did I think of it:
In January I finally caught up on this series, so when this book arrived I made sure to not let it linger on my shelves as long as Fire Touched.

And this is an entertaining read.

I will confess that the vampires are my least favorite supernaturals in this series, so I was glad Mercy escaped and encountered all other kinds of trouble on her journey. I liked the inclusion of Prague and how Briggs used its history and folklore.

The book follows both Mercy and Adam. As Adam is neck deep in vampire politics, his storyline was less interesting than Mercy's.

The one thing that annoyed me was the "Americans are better than Europeans" sentiment in Adam's storyline. That aside this is a fun addition to the series. You bet I'll be keeping an eye out for the next book.

Why should you read it:
It's a fun UF read.