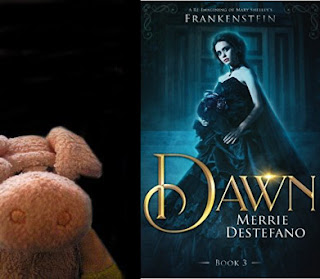 A holiday in Switzerland is supposed to lift Mary Wollstonecroft Godwin’s spirits. She wants to forget the past and have fun. In fact, everyone in her party is running away from one indiscretion or another—from her fiancé Percy Shelley to Lord Byron to Mary’s stepsister, Claire. But from the moment Mary arrives at Byron’s villa, she knows something is wrong. He rushes her indoors and forbids all of them to go out at night, claiming that the horrible weather has driven wild animals down from the mountains.

The only person who doesn’t seem to be running away from anything is a handsome, young Italian doctor, John Polidori. Instead, he is fervently pursuing local folk legends and a new scientific theory that claims people can be raised from the dead. But it’s not until they all challenge one other to write ghost stories that the real danger begins.

In a nightmare, Mary envisions a patchwork man animated by Galvanism and she begins writing Frankenstein. Likewise, fueled by local legends, John writes The Vampyre—one of the first vampire stories ever written. What neither one of them knows is that they are conjuring a dark evil. Before long, all of their lives will be in danger—for neither of these characters are imaginary. Far from it.

What did I think of it:
This is the last book in a series of novellas. The first set mood and atmosphere, the second raised the stakes, and this on is the thrilling climax of the story.

Mary and her friends are in serious danger. The sangsue are hunting them and have special plans for Mary. When tragedy strikes choices have to made, and an escape will have to be attempted.

This is a very fitting conclusion in my opinion. It's full of action, horror, heartbreak, and difficult decisions. I feared for my favorite character and for Mary. As things get more dire it was hard to see how things would end. Would there be an escape, or would Mary make different choices.

All in all a great read. I will definitely reread this series of novellas when I'm in the mood for some Gothic horror.

Why should you read it:
It's action packed Gothic horror.