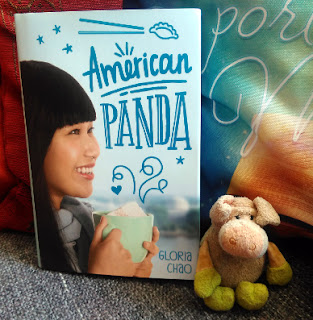 What is it about:
At seventeen, Mei should be in high school, but skipping fourth grade was part of her parents' master plan. Now a freshman at MIT, she is on track to fulfill the rest of this predetermined future: become a doctor, marry a preapproved Taiwanese Ivy Leaguer, produce a litter of babies.

With everything her parents have sacrificed to make her cushy life a reality, Mei can't bring herself to tell them the truth--that she (1) hates germs, (2) falls asleep in biology lectures, and (3) has a crush on her classmate Darren Takahashi, who is decidedly not Taiwanese.

But when Mei reconnects with her brother, Xing, who is estranged from the family for dating the wrong woman, Mei starts to wonder if all the secrets are truly worth it. Can she find a way to be herself, whoever that is, before her web of lies unravels?

What did I think of it:
I was intrigued by the blurb of this book and even though it was only available as a hardcover I decided to give it a try.

And this is a wonderful read.

Mei wants to please her parents and stay on their good side, but their expectations are high and they want a future for her that she herself is not sure about. As she tries to settle in to college life she feels like an outsider, while at the same time she tries to shake herself lose from her traditional background and find her own place in the world.

I do not claim to understand how it must be to grow up as a child of immigrants, trapped between two cultures. I did however grow up in a small village where my parents moved to when I was a baby, and were still seen as 'the new ones' when I was seventeen. So on that front I could really relate with Mei: feeling like an outsider and feeling weird, although I'm pretty sure my experiences were a lot less intense as they can be for children of immigrants.

I could really understand why Mei has a hard time telling her parents how she feels. The lies she tells them, the omissions, might seem unwise, but it's hard to disappoint the people you want to love you and be proud of you. I rooted for Mei to find a way to be happy.

The romance in the book is cute and slow. It's more one of the catalysts for Mei's change and growth than that it is the focus of the book. I still very much enjoyed the scenes between Mei and Darren.

All in all this is a beautiful and touching story that is recognizable for everyone who's ever felt like an outsider, or has struggled with the expectations of their family. You bet I'll keep an eye out for the next book by Chao.

Why should you read it:
It's a beautiful story about finding your identity.