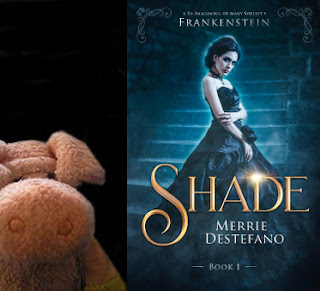 A holiday in Switzerland is supposed to lift Mary Wollstonecroft Godwin’s spirits. She wants to forget the past and have fun. In fact, everyone in her party is running away from one indiscretion or another—from her fiancé Percy Shelley to Lord Bryon to Mary’s stepsister, Claire. But from the moment Mary arrives at Byron’s villa, she knows something is wrong. He rushes her indoors and forbids all of them to go out at night, claiming that the horrible weather has driven wild animals down from the mountains.

The only person who doesn’t seem to be running away from anything is a handsome, young Italian doctor, John Polidori. Instead, he is fervently pursuing local folk legends and a new scientific theory that claims people can be raised from the dead.

But it’s not until they all challenge one other to write ghost stories that the real danger begins. In a nightmare, Mary envisions a patchwork man animated by Galvanism and she begins writing Frankenstein. Likewise, fueled by local legends, John writes The Vampyre—one of the first vampire stories ever written.

What neither one of them knows is that they are conjuring a dark evil. Before long, all of their lives will be in danger—for neither of these characters are imaginary. Far from it.

What did I think of it:
This is the first in a series of three novellas by Merrie Destefano. I love Destefano's writing, so you bet I jumped at the chance to get hold of an ARC of all three novellas.

This first novella is beautiful.

Destefano is a master at setting atmosphere and mood so I was soon engrossed in the story. Destefano managed to give the story a Gothic feel and I loved the building tension and otherness. Slowly you get to know more about all the people at the villa and slowly things shift from suspenseful to sinister.

The story is told from Mary's point of view, and I connected with her easily. The only thing I didn't get was why she is still engaged to Percy, whom I didn't like at all, but there were hints of a dark secret that might hold them bound together.

At the end of this novella things are seriously going wrong, and the ending is quite the cliffhanger. You bet I'll be reading the next novella soon, because I need to know what's next.

Why should you read it:
It's a suspenseful Gothic read.