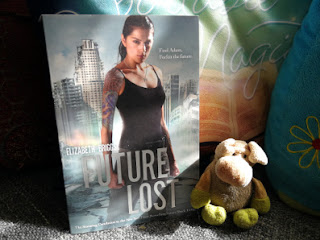 What is it about:
It’s been a year since Elena and Adam were first recruited by Aether Corporation and six months since they destroyed the accelerator, finally putting an end to Project Chronos and their involvement with Aether. Now they’re trying to move on with their lives. Elena’s in college and Adam is working on making genicote, his cure for cancer, safe for the public.

But genicote has become a dangerous fixation for Adam. He’ll do anything to figure it out, and when he goes missing, Elena realizes that he’s done the unthinkable: he went to Aether for help with the cure. To Elena’s horror, she discovers that Aether has created a new accelerator. Adam betrayed her trust and has traveled into the future to find the fix for his cure, but he didn’t come back when he was supposed to. Desperate to find him, Elena decides to risk future shock and time travels once more.

This future is nothing like they’ve seen before. Someone has weaponized Adam’s cure and created a dangerous pandemic, leading to the destruction of civilization. If Elena can’t find Adam and stop this, everyone is at risk. And someone will do anything to keep her from succeeding.

What did I think of it:
I loved the first two books in this trilogy, so pre-ordered this book so I could get my trotters on it as soon as it released.

And this is a really cool conclusion to the trilogy.

The time travelling is again not perfect. The way they travel through time is only possible if they're not only time traveling, but also traveling between different dimensions, but they never act or say anything that confirms this. And yes: I know, I'm a complete nerd when it comes to time travel. I want it to fit. Maybe it's a good thing though, that the characters in this story don't realize they're dimensional time travelers. Especially Elena with her perfect recall would probably go insane if she knew.

That aside I loved this story.

This time when Elena travels to the future she ends up in a post apocalyptic world. If I have one complaint it's that her time there was much too short in my opinion. She has to hunt down Adam and get back to her present to save the future.

I was gripped from the start and read this book in one sitting. It was just too cool to put down, even with the dimensional time travel not being acknowledged. As the story unfolded I began to get my suspicions as to what was going on, and couldn't wait to find out if I was right, and how Elena was going to fix things.

I will confess I would have liked to see a different ending than I got, but even so I was satisfied enough. All in all thi is a really great trilogy, and i will most certainly reread it.

Why should you read it:
It's an awesome YA read with time traveling.