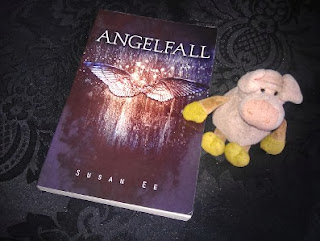 Angelfall (Penryn & the End of Days #1)
by Susan Ee

What is it about:
It's been six weeks since angels of the apocalypse descended to demolish the modern world. Street gangs rule the day while fear and superstition rule the night. When warrior angels fly away with a helpless little girl, her seventeen-year-old sister Penryn will do anything to get her back.

Anything, including making a deal with an enemy angel.

Raffe is a warrior who lies broken and wingless on the street. After eons of fighting his own battles, he finds himself being rescued from a desperate situation by a half-starved teenage girl.

Traveling through a dark and twisted Northern California, they have only each other to rely on for survival. Together, they journey toward the angels' stronghold in San Francisco where she'll risk everything to rescue her sister and he'll put himself at the mercy of his greatest enemies for the chance to be made whole again.

What did I think of it:
Somehow this book managed to stay off my radar until recently people started talking about the upcoming sequel. (I blame Jess Haines for me picking up Angelfall btw ;-)

And let me say: Why didn't anyone tell me sooner how awesome this book is?

Because this is an amazingly cool read. Once I started on it I couldn't put it down and finished it in one afternoon. It's that addictive!

I will confess I hadn't expected that a book about angels could be this gritty. I thought it would be the umpteenth Dystopian read that doesn't really deliver, but instead it's a thrilling Post Apocalyptic tale filled with violence, darkness and danger.

I loved both Penryn and Raffe. The interaction between them was cool and believable (apart from one scene that made me want to slap Penryn for being a bit slow to grasp what was glaringly obvious). I kept rooting for them both to survive the perils they have to face.

The ending left me hungry for much, much more and I immediately preordered the next book so I can get my trotters on it as soon as it releases.

Why should you read it:
It's Post Apocalyptic Awesomness with angels.

I'm so glad you enjoyed it! Can't wait to fangirl squee over the next book with you! :D

I must be the only person I know who hasn't read this yet.