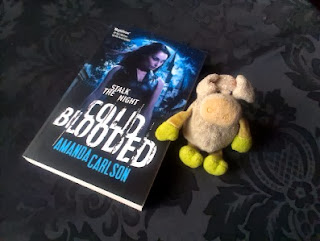 What is it about:
Jessica arrives back in town to find her best friend missing and the most powerful witch in the country is blaming her for it. But before they can move to save her, the group is attacked.

On the run, Jessica and Rourke head to the mountains. Several surprises await them, but in order to save her father they are forced to leave for New Orleans early.

Arriving on the Vampire Queen's doorstep unexpectedly, and bringing trouble on their heels, the Sects are thrown into an all out war. The vicious
skirmish ends up forcing the vamps and Jessica to fight on the same team.

The Vamp Queen ends up owing Jessica, but what Jessica doesn't realize is just how soon she'll have to cash it in...

What did I think of it:
This series is getting better and better.

Did I have my doubts about liking Jessica at the start of Full Blooded, I love her now. She's a cool and fun heroine even though she still seems a bit too powerful at times. I also really loved that Rourke had a bigger role in this book compared to the previous book. I think Jessica and Rourke make a perfect team and I very much enjoyed getting to know Rourke better. The scenes between Jessica and Rourke were my favorites I will confess.

The story is intense and full of action. Just when you think Jessica gets a chance to take stock of the situation and recover she and her friends are thrown into danger again. I was on the edge of my seat for most of the book.

I like how not only Jessica is growing into her powers over the course of this series, but how other characters are developing and changing as well. Apart from Tyler (Jessica's brother, who I just don't like for some reason) I really like the team Jessica has surrounded herself with, and I'm curious what will happen next for them.

The ending was another major cliffhanger, but while this annoyed me a bit in the first book, I didn't mind it in Cold Blooded. It tells me the next book will be another cool, action-packed adventure and it hinted deliciously at the things and dangers yet to come.

Why should you read it:
It's a thrilling and cool Urban fantasy read

I have to agree with you with the ending. Amanda sets us up with excitement and promise for the next book. :) Glad you enjoyed it so.

It's not my favorite genre, but you make a good case for this series. I'll keep it in mind. I can allways go to the "library/Aurian" and try it first.
;-)

I loved this one and I can't wait to read more!

The series is on my wishlist Sullivan, glad you love it.

Thanks everyone! i'm really looking forward to the next book.