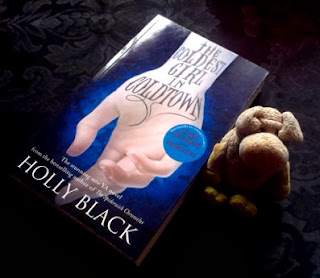 The Coldest Girl in Coldtown
by Holly Black

What is it about:
Tana lives in a world where walled cities called Coldtowns exist. In them, quarantined monsters and humans mingle in a decadently bloody mix of predator and prey. The only problem is, once you pass through Coldtown’s gates, you can never leave.

One morning, after a perfectly ordinary party, Tana wakes up surrounded by corpses. The only other survivors of this massacre are her exasperatingly endearing ex-boyfriend, infected and on the edge, and Gavriel, a mysterious boy burdened with a terrible secret. Shaken and determined, Tana enters a race against the clock to save the three of them the only way she knows how: by going straight to the wicked, opulent heart of Coldtown itself.

What did I think of it:
I am in love with this book!

It has everything I love in a good Dystopian YA read: It's well written, has great world building, a lead character that I can root for and it's gritty and grim.

Tana is a great character. She isn't the 'special' heroine you see so often in Dystopian YA stories. She is insecure, makes mistakes, terrible things happen to her (And not just to others. Ok, she's lucky to survive the massacre that kills most of her friends, but that's about it.), but she keeps struggling on and manages to overcome the obstacles that keep getting thrown in her way.

And then there's Gavriel. He is such a cool character. The way Black writes him is incredible. I was intrigued by him and even if the story hadn't been as awesome as it is, I had wanted to keep reading to find out more about him.

Luckily though the story is absolutely awesome. It's intense, grim, gritty and had me on the edge of my seat. I started reading this book shortly before I had to go to work and had to put it down when I was several chapters in. I can tell you I counted the hours until the end of my workday so I could continue my reading.

There's only one negative thing I can say about this book: It's a standalone as far as I understand and that saddens me, because I could read lots more about these characters and this setting. So to get my fix I'll just have to reread this book often.

Why should you read it:
It's an awesome Dystopian YA read with vampires.

Great review Sullivan, you are tempting me with this one.

It's so good I'm afraid I might go total fanpiggy when meeting Holly Black at WFC IN a couple of weeks.

I was wondering about this one! thanks for the review.