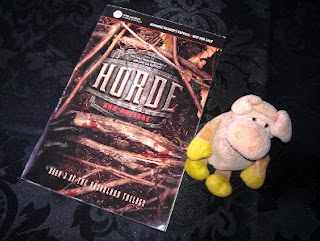 What is it about:
The horde is coming.

Salvation is surrounded, monsters at the gates, and this time, they're not going away. When Deuce, Fade, Stalker and Tegan set out, the odds are against them. But the odds have been stacked against Deuce from the moment she was born. She might not be a Huntress anymore, but she doesn't run. With her knives in hand and her companions at her side, she will not falter, whether fighting for her life or Fade's love.

Ahead, the battle of a lifetime awaits. Freaks are everywhere, attacking settlements, setting up scouts, perimeters, and patrols. There hasn't been a war like this in centuries, and humans have forgotten how to stand and fight. Unless Deuce can lead them.

This time, however, more than the fate of a single enclave or outpost hangs in the balance. This time, Deuce carries the banner for the survival of all humanity.

What did I think of it:
You probably heard me rave about how much I love Enclave and Outpost. So I preordered Horde as soon as it was available on bookdepository. Imagine my joy when I won an ARC of Horde in a contest Ann Aguirre held on her Facebook page so I could read Horde early.

And Horde is so good!

When reading the end of Outpost, my first thought was: Horde is going to be epic!

And it is. It's full of hard decisions, battles, heartache and pain. It's dark and grim, but still Deuce doesn't give up. She fights for the things and people she holds dear.

I love Deuce. She's grown throughout this trilogy and is changing from the brat she was at the start of the first book into a woman who knows what she wants and who doesn't give up when obstacles get thrown in her way. That doesn't mean she's a hard-ass. She has her fears and doubts, but knowing people depend on her, she soldiers on, showing her vulnerability only to those she trusts.

And Fade!
The things he endured in Outpost had a large impact on him and his struggles against his fears and nightmares are heartbreaking. I loved how Aguirre wrote the relationship between Deuce and Fade, how Deuce doesn't quit when things get difficult between her and Fade. There are some really intense and emotional scenes between the two of them and I kept rooting for them to find a way back to each other.

The overall story line is as I said grim. There's a major confrontation brewing between humans and the horde and things are looking dicey for the humans. I like how Aguirre showed the harsh reality of war in this book. It's not all heroics. Victories are hard won and not without loss. This book is the most intense and grim of the three books in this trilogy I can tell you.

I can't tell you too much about the ending without being spoilery, but let me just say:

This book is an epic and fitting conclusion to this trilogy and made me all emotional.

You can bet I will reread this whole trilogy regularly and I'm already looking forward to the next book by Ann Aguirre. She has become an auto-buy author I can tell you.

Why should you read it:
It's an awesome and intense Post apocalyptic YA read.

Okay, you have convinced me, I need to try this series.

I hope you will like it. It's one of the best series I've read, but I'm a fan of post apocalyptic settings.

Oh I can't wait to read this one. My son and I have been reading this series and look forward to time when we can read the third. :) Thank you!