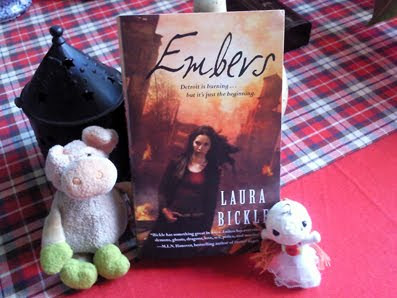 What is it about:
Unemployment, despair, anger--visible and invisible unrest feed the undercurrent of Detroit's unease. A city increasingly invaded by phantoms now faces a malevolent force that further stokes fear and chaos throughout the city.

Anya Kalinczyk spends her days as an arson investigator with the Detroit Fire Department, and her nights pursuing malicious spirits with a team of eccentric ghost hunters. Anya--who is the rarest type of psychic medium, a Lantern--suspects a supernatural arsonist is setting blazes to summon a fiery ancient entity that will leave the city in cinders. By Devil's Night, the spell will be complete, unless Anya--with the help of her salamander familiar and the paranormal investigating team --can stop it.

Anya's accustomed to danger and believes herself inured to loneliness and loss. But this time she's risking everything: her city, her soul, and a man who sees and accepts her for everything she is. Keeping all three safe will be the biggest challenge she's ever faced.

What did I think of it:
I really liked this story. It's well written, has a great and suspenseful storyline and has one of the coolest familiars I've come across (the demon duck in 'A Nameless Witch' by A. Lee Martinez is even cooler, but that story isn't as good as this one.) I must confess at this point I pictured Sparky (the familiar) as a small Komodo Dragon, which is one of my favourite animals.

Voodoo Bride wants me to tell you that she wasn't very happy with the romance in the book. She didn't feel Anya had any real connection to either one of the love interests, but I told her that's because of some emotional issues Anya has so it fits in with the story. Well, just read the book to see if you agree with me or Voodoo Bride. Even without a convincing romance storyline, it's well worth the read.

Why should you read it:
Because it has Sparky, the cool familiar!
And because it's a very well written and engaging Urban Fantasy.

There's going to be a second book in August: 'Sparks'
And coming in June: 'Dark Oracle', Laura Bickle wrote this book under her alias Alayna Williams (I must confess I got high hopes for this one.)

Thanks so much for picking up EMBERS! I'm glad that you enjoyed it. There's more romance in the second book, I promise! ;-)

Ah, that will please Voodoo Bride! I myself am looking forward to Dark Oracle. That one sounds really cool!

I aim to please!

Thanks! If you like the X-Files, weird science, conspiracy theories, or the Tarot, DARK ORACLE will be a fun read. I wrote that book literally with a deck of cards in hand, so it was bit of a strange writing process.
;-)

Check, check, check and check!
I so must go pre-order now!

I've only read one urban fantasy book and didn't like it much, so I'm not sure if it's my thing. But this one sounds good.

There's lots of different Urban fantasy out there. There's heaps of UF books I don't like either. I could advice you to try out some UF writers/books. I can really recommend Embers and Mind Games (by Carolyn Crane) when it comes to recent releases as both are very a-typical and unique UF stories.