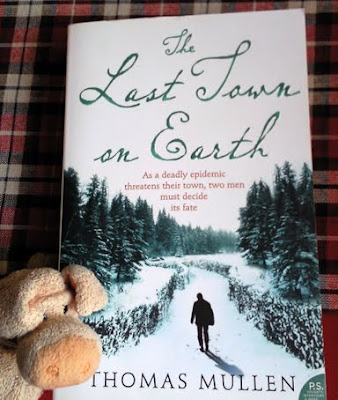 The Last Town on Earth by Thomas Mullen

What is it about:
A killer is stalking the country - taking young and old alike ...
It is 1918 and the remote American mill town of Commonwealth has shut itself off in a self-imposed quarantine against a deadly and pitiless enemy - a killer influenza that has made a tragedy of everyday life.

But Commonwealth is no ordinary town - it is built and run on principles of freedom and democracy. It's inhabitants, desperate to escape the terrible fate of neighbouring towns, have voted to seal the town off - no one enters, and if anyone leaves they may not return. So when armed sentries are confronted by a starving soldier begging to enter the town, two men are forced to make a decision that will have profound consequences for them, the town, and all who live in it ...

What did I think of it:
This is a beautiful story. At times sad, at times hopeful, at times grim.
The choices the people of Commonwealth face are hard and I for one couldn't blame those who made a wrong choice and it's even up for debate if they actually made a wrong choice. Because this story does not divide the world in clear cut black and white, but instead it paints an all too realistic gritty world where shooting a man in cold blood may be the heroic thing to do, while showing mercy may be the thing that condemns you. But who will know for sure?

Apart from the really tense and psychological story this book also gives a disturbing view of the 'Spanish flu'. I had read about the Spanish flu before, but never realised how nasty this disease actually was. The way the information about the flu was written in to the story didn't distract from the story and even added more tension as you could fully understand why the people of Commonwealth made the decision in the first place to seal off their town.

Why should you read it:
If you like a story that makes you think about human behaviour and that's also full of suspense I'd advice you to give this book a try.

It sounds a little like the one Bunny Girl wrote - Steal Tomorrow.

I haven't heard of that one. Will check it out.

It's about the world after everyone over 18 dies from a virus. She has it for sale in PDF through Amazon, but I've been reading it on her site for free.

Wow, this sounds really good. I just jotted down the title so I don't forget it.

I hope you'll enjoy it. I myself think this is a beautiful story