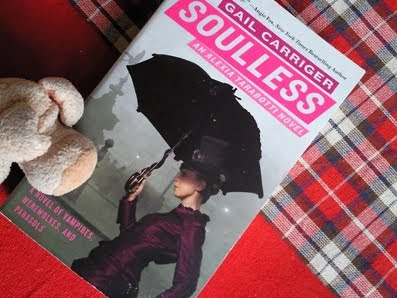 What is it about:
Alexia Tarabotti is laboring under a great many social tribulations. First, she has no soul. Second, she's a spinster whose father is both Italian and dead. Third, she was rudely attacked by a vampire, breaking all standards of social etiquette.

Where to go from there? From bad to worse apparently, for Alexia accidentally kills the vampire -- and then the appalling Lord Maccon (loud, messy, gorgeous, and werewolf) is sent by Queen Victoria to investigate.

With unexpected vampires appearing and expected vampires disappearing, everyone seems to believe Alexia responsible. Can she figure out what is actually happening to London's high society? Will her soulless ability to negate supernatural powers prove useful or just plain embarrassing? Finally, who is the real enemy, and do they have treacle tart?

What did I think about it:
This book was a pleasant surprise. It's witty and funny and has a very original story. Not many writers seem to have the courage to join supernatural beings with Victorian times, but Carriger rises to the challenge and even manages to sprinkle a dash of Steampunk into the mix with very satisfying results. The story was engaging and there was even enough romance to keep Voodoo Bride happy too. The one thing I could say against the book is that the humorous tone kept me from being worried about the outcome.

There's a second book released named 'Changeless', which is in my 'To Be Read' pile and a third book 'Blameless' will be released later this year.

Why should you read it:
If you like stories set in Victorian times and you like werewolves and vampires you will most certainly like this book.


And coming soon:
A review about a totally different kind of book also named 'Soulless'.

It's always so nice when the Steampunk is actually set in the Victorian era where it belongs.
Soulless - vampire? Sounds interesting.

I love Soulless!It's one of the most unique scifi/fantasy books I've read all year. I can't wait to read Changeless. Great review!

oh i don't know, the humor was the best part for me. it's one of those books that keep you smiling even during the intense action scenes ;-D