Zombie, an Anthology of the Undead - Book Review part 2 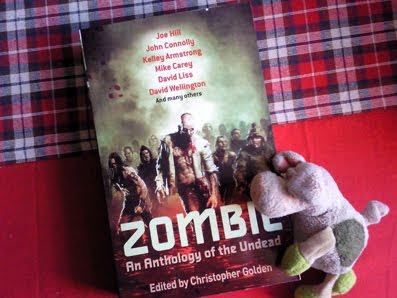 Zombie, an Anthology of the Undead edited by Christopher Golden

Find part 1 here
So here are my thoughts about the second half of this anthology:

'Second Wind' by Mike Carey - The main character in this story just wants some peace and quiet now that he's dead, but that's something he has to work for. A nice story, but a bit slow at times.

'Closure, Limited' by Max Brooks - A short story about a man who visits a ship that caters to some special needs. Didn't much care for this one. It's mostly talking, not much actual action.

'Among Us' by Aimee Bender - Some impressions on the theme zombie. I thought this one was disturbing, but beautiful.

'Ghost Trap' by Rick Hautala - A diver finds a corpse at the bottom of the sea that is tied down to a block of concrete. A decent, suspenseful story in my opnion.

'The Storm Door' by Tad Williams - A paranormal investigator is looking into a strange possesion case. The story idea was cool and this story showed some potential, but in the end it fell flat and maybe it's just me, but I also found it very predictable.

'Kids and Their Toys' by James A. Moore - A couple of young boys find a corpse which turns out to be a zombie. A very disturbing story! Ugh...

'Shooting Pool' by Joe R. Lansdale - This story doesn't even have zombies!! What is it doing in this book? Or am I really missing something here?

'Weaponized' by David Wellington - The military is experimenting with a new kind of warfare. Didn't much like this one. The story isn't bad, but the writing didn't grab me.

'Twittering from the Circus of the Dead' by Joe Hill - A teenage girl twiiters about a trip she has to make with her family and their visit to a Freakshow. Once you get into the twitter update style of writing this story is quite cool.

So what's the end score?

The second part of the book has 4 stories I liked if not loved, 1 I found quite disturbing and 4 I didn't much care for.

That makes a total of 10 cool stories, 1 decent story, 1 disturbing story and 7 I didn't much care for.
My favourite still is 'Family Business' by Jonathan Maberry.
Not a bad score I think.

Why should you read it:
If you like a good zombie story, this book will surely entertain you!

In an anthology with zombies as the theme, you've got to expect at least one disturbing story.

Seems like lately have haven't been reading much in the way of short stories. Novellas, now and then, but that's about it. I used to read a lot of SF magazines, but that was ages ago.

i like your review with bits about each story.

@Alice: I so wish there were good SF magazines over here, but I would have to specially order them online if I wanted to read them.