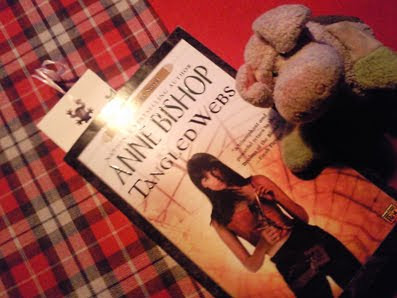 What is it about:
The invitation was signed Jaenelle Angelline, she who had been both Witch and Queen.

It summons her family to an entertainment she has specially prepared. Surreal SaDiablo, the former courtesan and assassin, is the first to arrive. But as she and her escort enter the house, the door disappears. Surreal finds herself trapped in a nightmare created by the tangled webs of Black Widow witches...a nightmare where the monsters are all too real, and if she uses Craft to defend herself, she risks being sealed in the house forever.

But Jaenelle did not send the invitation.

Now, Jaenelle and her family must rescue Surreal and the others inside without becoming trapped themselves—and they also must discover who created such an evil place, and why. Because there is one thing they all know about this house: no matter who planned it as a way to kill members of the SaDiablo family, only one of the Blood could have created the trap…

What did I think of it:
This is the first book by Anne Bishop that I read after reading her short story 'Stands a God Within the Shadows' which I absolutely love!

I soon discovered this book is part of a series (The Black Jewels series) and it's not the first book in the series. And let me tell you: if you're going to read any book in the Black Jewels series I can advice you to start with the first book and work your way through the books in the right order. I'm telling you this as I reread this book after reading the original Black Jewels trilogy that started this series and not only made a lot of things in the book more sense the second time around, I also wasn't as distracted from the storyline by the characters as the first time.

I mean: the story is quite good, it has lots of suspense and creepy stuff happening, but the characters are what make this book. They're all very intriguing and well written. Not knowing who they were the first time I read the book I kept getting sidetracked wondering who they were and why they acted like they did. Having read the original trilogy my questions had been answered so second time reading the story I could give my attention to the story instead of just the characters.

So in conclusion: cool story, even cooler characters!

Why should you read it:
Well.....
I advice you to start with the original trilogy: 'Daughter of the Blood', 'Heir to the Shadows' and 'Queen of the Darkness'.
If you like those books then you should pick up 'Tangled Webs' next.