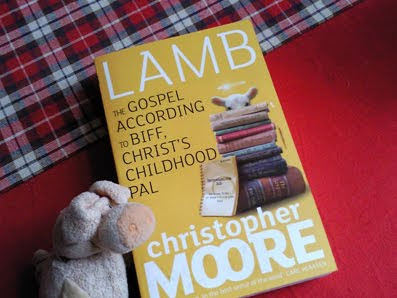 What is it about:
The birth of Jesus has been well chronicled, as have his glorious teachings, acts, and divine sacrifice after his thirtieth birthday. But no one knows about the early life of the Son of God, the missing years - except Biff, the Messiah's best bud, who has been resurrected to tell the story.

Verily, the story Biff has to tell is a miraculous one, filled with remarkable journeys, magic, healings, kung fu, corpse reanimations, demons, and hot babes, Even the considerable wiles and devotion of the Saviour's pal may not be enough to divert Joshua from his tragic destiny. But there's no one who loves Josh more - except maybe 'Maggie,' Mary of Magdala - and Biff isn't about to let his extraordinary pal suffer and ascend without a fight.

What did I think of it:
I really enjoyed this story. It's humorous, witty and original. My favourite part was early on in the book when Biff and Joshua play 'Sodom and Gomorrah' with their younger brothers. I laughed out loud at that scene, I must confess. The whole book is fun though, not just this particular scene and there's enough humor for lots of laughs and chuckles before you reach the bitter sweet ending (this is the gospel after all). This was my first trip into the writings of Christopher Moore, but I can tell you it won't be my last!

Why should you read it:
If you're interested in a humorous, well written tale about the life of Jesus be sure to pick up this book.
If you however think the gospel has to be taken seriously, stay far away from it.


Don't forget to tune in tomorrow for my interview with Gini Koch!

Mom went to a booksigning for Christopher Moore and thought it was great. She says that you ought to follow him on Twitter or Facebook because he is pretty funny on there too!

Thanks for that advice, I'll tell my owner to look him up on facebook.

I loved this book! I also loved Moore's LUST LIZARD OF MELANCHOLY COVE.

My husband and I were lucky enough to go to a Christopher Moore signing a few weeks ago. He is hysterically funny in person!

I've heard good things about Christopher Moore, but I haven't read any of his books yet. I will be starting the Fool soon for my book club, though I think this one sounds more my style.