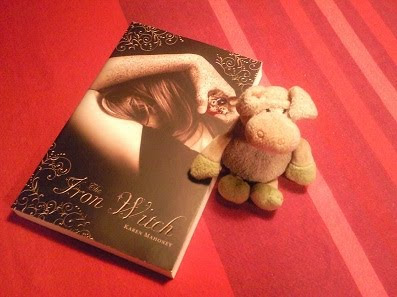 What is it about:
Freak. That's what her classmates call seventeen-year-old Donna Underwood. When she was seven, a horrific fey attack killed her father and drove her mother mad. Donna's own nearly fatal injuries from the assault were fixed by magic—the iron tattoos branding her hands and arms. The child of alchemists, Donna feels cursed by the magical heritage that destroyed her parents and any chance she had for a normal life. The only thing that keeps her sane and grounded is her relationship with her best friend, Navin Sharma.
When the darkest outcasts of Faerie—the vicious wood elves—abduct Navin, Donna finally has to accept her role in the centuries old war between the humans and the fey. Assisted by Xan, a gorgeous half-fey dropout with secrets of his own, Donna races to save her friend—even if it means betraying everything her parents and the alchemist community fought to the death to protect.

What did I think of it:
One of the better YA books I've come across lately. Well written, interesting setting and characters and teen angst kept to a minimum. The mix of alchemy and faeries isn't something I'd expected to go together, but Mahoney makes it work perfectly. The story is clearly a set up for the rest of the series and reads more like an introduction than a stand alone novel, but it's suspenseful and intriguing enough that I don't mind. Instead it makes me curious and eager for the next book.

Why should you read it:
It's a very original, well written YA read.

I've been curious about this title lately. I'm glad to hear that it stands out in its originality, but not so glad to hear that it's the beginning of yet another series. (Then again, if I read it and it turns out to be really good, I'll probably be thrilled that there's more to read, aye?)

And frustrated you have to wait for the next book ;-)

LOL! That's true! ;-) I usually wait until after several books in a new series have been released so that I don't feel too frustrated about the next one not being out yet. That will definitely be the case with this book, then!