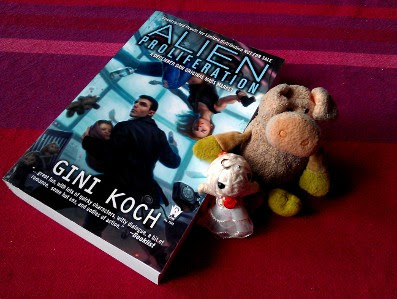 What is it about:
Alien Super-Being Exterminator Kitty Katt is expecting her first baby. But the alien attacks are getting more dangerous, and now Kitty and her Alpha Centaurion husband, Jeff, have to find out who's behind the conspiracy to kill Kitty's secret agent mom and what caused Kitty's transformation into a superhuman-and they've got to do it all before the baby shower...

What did Voodoo Bride and I think of it:

Once more Koch delivers a wacky, action packed, delightfully fun adventure that keeps you guessing and laughing from the start.

There's quite some emotional moments in this book as well with at least two moments that had us sniffling.

Kitty's adventures have always been a bit over the top (which to me is one of the charms of this series), but in this book certain events sky-rocket totally out of there, to soar back into credible just before you feel like you're being taken on a ride. This is not meant as criticism in case you're wondering. I think it's amazing how Koch comes up with the craziest things and manages to make them totally believable and although Touched by an Alien will probably always be my favorite in this series, Alien Proliferation is a very close second.

Those who read and loved the earlier books in this series will absolutely love this book as well. For those of you who haven't started this series yet: Go get the first three books now and you'll be all up to speed for Alien Proliferation once it's released in December.

We'll impatiently be counting the days until the release of book 5: Alien Diplomacy

Why should you read it:
It's a fun, wacky and awesome adventure.

I have fallen behind on this series. :) I'm glad to see that it's still going strong.

i hadn't seen this one yet. this series looks so good!

... *before the baby shower* lol
love the humor here, so maybe it's a sci-fi I need to pick up sometime :D

LOVE this review! And spoiler free which I can't thank you enough for. :) I'll be reading my copy soon too! xoxoxo