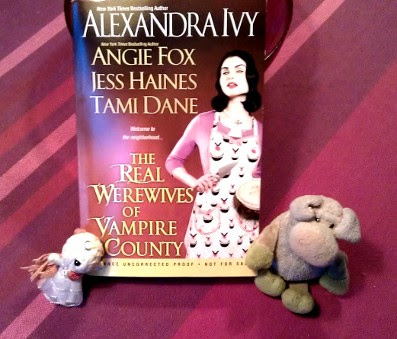 What is it about:
"Where Darkness Lives" by Alexandra Ivy
No one's more surprised than Sophia when she's struck by an unfamiliar maternal urge to move near her daughters. But instead of being greeted by a welcome committee, she's targeted by kidnappers. . .and saddled with a gorgeous bodyguard on a mission to protect—and seduce. . .

"Murder on Mysteria Lane" by Angie Fox
When a werewolf trophy wife is found dead in Vampire County, Heather McPhee goes undercover to investigate. Heather's never been a mascara-and-manicures sort of girl, but she's willing to learn. Especially with sexy vampire detective Lucien Mead posing as her husband. . .

"Werewolves in Chic Clothing" by Tami Dane
Ever since Christine Price moved in with her fiancé, Jonathan, and his twelve year-old son, she's worked hard to fit in with a cadre of local women whose lives seem picture-perfect. Except no one in Jon's upscale neighborhood is quite who they appear to be. Least of all Jon. . .

"What's Yours is Mine" by Jess Haines
Still Waters is like many other exclusive gated communities—except that it's home to one of the largest werewolf packs in the state. But Tiffany Winters isn't frightened of her big, bad new neighbors. In fact, she intends to take her place among the pack. . .

What did I think of it:
Those who know me will probably be able to guess I wanted to read this book because it has a story by Jess Haines. Luckily her story wasn't the only gem in this anthology.
I will give my thoughts about each of the 4 stories.

"Where Darkness Lives" by Alexandra Ivy
I strongly disliked Sophia, the lead character. The plot was largely evolving around a romance and not liking one of the two people involved in the romance isn't a good thing I think. So this story didn't work for me. Maybe I should try something else by Ivy as the writing was decent.

"Murder on Mysteria Lane" by Angie Fox
This story was fun and enjoyable. I really liked Heather and Lucien and wouldn't mind reading other stories with the two of them in the lead. The story did feel a bit chaotic and rushed at times though. I most probably will read more by Fox in the future.

"Werewolves in Chic Clothing" by Tami Dane
A really cool story.
The atmosphere, setting and pacing of this story were all great. The characters ranged from weird to mysterious and from cooky to likeable. The story was clever and fun and if it's any indication as to the quality of other work by Dane she might become a must buy. I'm putting her upcoming book 'Blood of Eden' on my wishlist in any case.

"What's Yours is Mine" by Jess Haines
This story is very different in mood and setting (although set in the same world) as Haines H&W Investigations series. Is that a bad thing? Absolutely not! I loved this snarky story which in my opinion fitted the title of the anthology the best. I could easily see this story play out in an episode of Desperate Housewives (if there were werewolves in that show). It is fun, catty, snarky and as with all good stories: much too short. I dont think I need to tell you I'll definitely read Haines upcoming books.


Conclusion: I enjoyed (if not loved) three out of the four stories and will pick up more books more by at least two of the three authors I didn't know yet, which is a great score I think.

Why should you read it:
It's got backstabbing werewives and other cool paranormal stuff.

You had me at *backstabbing werewives* lol