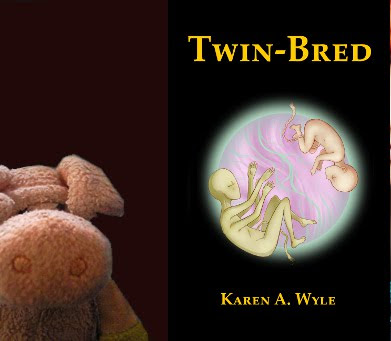 Twin-Bred by Karen A. Wyle

What is it about:
In Twin-Bred, the human colony on Tofarn and the indigenous Tofa have great difficulty communicating with and basically comprehending each other. Scientist Mara Cadell, who lost a fraternal twin in utero, proposes that host mothers of either or both species carry twins, one human and one Tofa, in the hope that the bond between twins can bridge the gap between species. Mara has secretly kept her own twin, Levi, alive in her mind as a companion and collaborator.

Mara succeeds in obtaining governmental backing for her project – but both the human and Tofa establishments have their own agendas. Mara must shepherd the Twin-Bred through dangers she anticipated and others that even the canny Levi could not foresee. Will the Twin-Bred bring peace, war, or something else entirely?...

What did I think of it:
An original and beautifully written SciFi story.

Twin-Bred is written in a calm, narritive, almost detached tone of voice which fits this story about a scientific experiment really well. The story is really intriguing and I couldn't stop reading as I wanted to find out where this experiment would lead and what would happen to the human and Tofa children who were brought in to the world. Would they really be able to make a difference?

The Tofa are interesting and well worked out aliens. Wyle really succeeded in making them likeable, but at the same time mysterious and a bit creepy. As the story focuses on the humans and the Twin-Bred children, the 'real' Tofa stay mysterious, their actions strange and seemingly dual in nature and they act as a possible threat throughout the experiment.

In a way this story reminded me of Čapek's 'War with the Newts', not surprising as both stories shine a light on how humans treat each other and where we go wrong. But where Čapek's view is a grim one, Wyle still leaves some hope that we as a species might one day see the light.

All in all a beautiful, thought provoking tale.
I will keep an eye out for Wyle's next book.

Why should you read it:
It's an original and beautiful SciFi read.

Keep an eye on this blog for an interview with Karen A. Wyle somewhere next week.

Great review! Twin-Bred sounds like a wonderful sci-fi read, of which I've not enjoyed in ages. I like the mysterious hint of the real Tofa lurking in the background!