Bound to the Prince - Book Review by Voodoo Bride 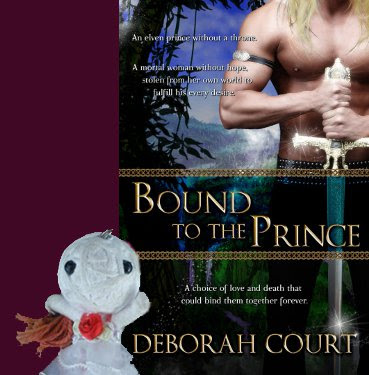 Bound to the Prince by Deborah Court
ebook

What is it about:
Once a proud warrior, elven prince Elathan was living in exile, fallen from grace and separated from his own people. He wanted the mortal woman the moment he saw her standing on Blackfriars Bridge, staring down into the darkness with unbearable pain in her eyes. This strangely compelling female also happened to have luscious curves that made his body ache with desire.
Naturally, he decided to hunt the woman down, drag her to his lair and command her to become his slave of pleasure. But would her frail human body survive a night of untamed passion in the arms of a Fae?

After a devastating breakup with her fiancé, Igraine Chandler was spending her honeymoon in England all by herself, her life utterly bereft of meaning. For who could ever love a plain, slightly overweight nurse from New Jersey with nothing left but a broken heart and her lost dreams of a home and a family?
But she never imagined that she would soon set out into a world beyond her wildest dreams, and help a prince reclaim his throne …

What did Voodoo Bride think of it:
This is a steaming hot read.

Elathan is a tortured, bitter (and super sexy) Alpha hero who goes for what he wants and in this case it's Igraine, a human woman who's been hurt, but not broken.

There's an instant attraction between the two, although the fact that Igraine is completely at Elathan's mercy makes their relationship a skewed one at first. Readers who do not like forced seduction might want to stay clear of this book. That being said: for me the seduction and romance totally worked. It was tense, hot and extremely satisfying. I loved how Igraine stood her ground and slowly, but surely turned the tables on her overbearing prince.

There's lots of really steamy scenes as the story focuses on the romance between Elathan and Igraine, but there's a smaller action storyline as well that I really enjoyed. Court plans on making this a trilogy (the next book will feature another smoking hot Elf in search of his lady love as I understand it) and I will most certainly pick up the next book as I want more Alpha Elven warriors.

Straight-up romances are a guilty pleasure read of mine, and this sounds so good! I like finding ones that mix in elements of other kinds of stories I like, such as fantasy or paranormal.

Thanks for posting about this one, I'll be keeping an eye out for it!

@Jeffe: That's what Voodoo Bride thinks as well, but we know that not everyone likes it, so mentioned it so there's no surprises for the unsuspecting reader.