West with the Wind - Book Review by Voodoo Bride 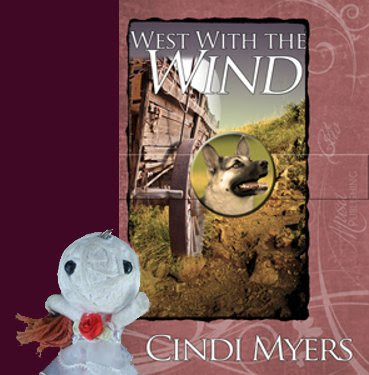 West with the Wind by Cindi Myers
ebook

What is it about:
More than gold awaits two lovers at the end of the trail.

Mariah Tate and her dog, Worthy, persuade veteran guide Campbell Jefferson to let them join his expedition headed to California. Camp can't say no to the beautiful widow, but his need to protect her soon clashes with her need to keep secrets. Mariah left more than bad memories behind in Pennsylvania and her growing attraction to the stoic but surprisingly sensitive Camp forces her to face up to the consequences of the choices she's made. Camp doesn't know what Mariah's hiding, but he's determined not to let the only woman who ever made him want to settle down get away. He pursues her across the prairies, through stampedes, Indian raids, desert drought and mountain snows. In the gold camps of California, Camp will discover Mariah's secret, and prove the love she wants most isn't out of reach.

What did Voodoo Bride think of it:
A delightful Historical Romance full of adventure.

I loved both the exciting journey to California and the romance between Mariah and Camp.

The romance is bittersweet and I liked how there's a slow build up which made it feel all the more real and intense. There's the occasional moment where you want to bang Camp's and Mariah's heads together, but mostly I really enjoyed the romantic storyline and I really wanted for Camp and Mariah to work things out between them.

As for the journey:
There's adventure, heartache and disaster along the way to the West and Myers must have done a lot of research to be able to describe the perilous journey in such vivid detail. There's one part of the story that had me raising my eyebrows in disbelieve, I will confess, and that disappointed me as for the largest part this story was so very well researched and believable, but I decided not to let this spoil the book for me as all in all the story is compelling and enjoyable.

Why should you read it:
I can advice this story to anyone who loves Historical Romances that have lots of adventure.


Buy this ebook from Musa here

It's been ages since I've read a good historical romance; and this one sounds pretty interesting so might have to give it a whirl :D