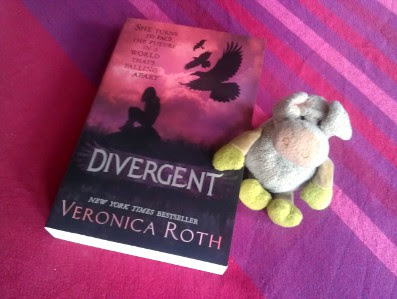 What is it about:
In Beatrice Prior's dystopian Chicago, society is divided into five factions, each dedicated to the cultivation of a particular virtue--Candor (the honest), Abnegation (the selfless), Dauntless (the brave), Amity (the peaceful), and Erudite (the intelligent). On an appointed day of every year, all sixteen-year-olds must select the faction to which they will devote the rest of their lives. For Beatrice, the decision is between staying with her family and being who she really is--she can't have both. So she makes a choice that surprises everyone, including herself.

During the highly competitive initiation that follows, Beatrice renames herself Tris and struggles to determine who her friends really are--and where, exactly, a romance with a sometimes fascinating, sometimes infuriating boy fits into the life she's chosen. But Tris also has a secret, one she's kept hidden from everyone because she's been warned it can mean death. And as she discovers a growing conflict that threatens to unravel her seemingly perfect society, she also learns that her secret might help her save those she loves . . . or it might destroy her.

What did I think of it:
This was a surprisingly cool read.

I did have some trouble with the world view of this book at first. The factions and how they function didn't seem very believable, but for the sake of the story I decided to take them for granted.

The story is suspenseful, intense and really cool.

I really liked Tris and could understand her struggle to try to fit in. And even though I was still a bit skeptic about the factions they did make for a very interesting setting.

The initiation Tris goes through is brutal and made for some really intense moments. There was lots of cool action as well. I did wonder how the initiation for other factions would be and luckily for some of them it is explained.

The romantic storyline was very nice, though slightly predictable, but at least it wasn't yet another love triangle or square, so that made me all happy.

Very late in the book a second major storyline gathers speed and plunges Tris in even more intense situations. This leads to an ending that makes you want to pick up the next book in this series right away.

This is certainly one of the more interesting Dystopian stories I've read lately and I will try to get hold of book 2 as soon as possible.

Why should you read it:
It's an action packed, intense Dystopian YA

Glad you enjoyed it, Sully! I was kind of disappointed by all the action crammed in at the ending, but on the other hand my daughter loved it and also Insurgent! So, hope you get your mitts on the second book soon & don't forget McPig needs more ice cream <3 lol

Now that you mention it..... I haven't had ice cream in a while. Must remedy that soon.

The review for Insurgent is coming up next week.

Aaah, all the things I want to hear. I did pick this one up, but have to find time to get to it. So glad to see you enjoyed it. Thank you.

I enjoyed it too! It only took me about a day to read. I also liked that there was no love triangle. I didn't think book 2 was as good, but I look forward to hearing your thoughts on it.

you know I'll be the last one who haven't read this book yet. Glad you liked it, I'll really need to try it as well.