Today I have a special guest:
Gini Koch 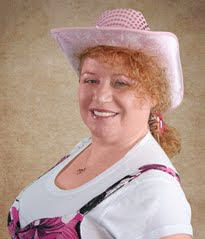 Thanks for stopping by on the Necropolis Enforcement Blog Tour of 2012! If you haven’t read the first chapter of The Night Beat, hit Deathless Prose over at my website and check it out. Then, hit each stop along the way to get more of the story. Missed a stop? Check the website for the Tour Page and get caught up.

And don’t forget to get entered to win a copy of The Night Beat at EVERY blog tour stop along the way! Plus, follow the Tour ‘til the end and get entered for a mega-prize! So, grab your badge -- it’s time to join Necropolis Enforcement!

For the Love of Lovecraft
By Gini Koch

H.P. Lovecraft didn’t invent modern horror -- really, that honor goes to Mary Shelley and Bram Stoker, and, after them, Edgar Allan Poe (though Shelley also gets to have invented science fiction -- sisters been doin’ it for themselves for a long time) -- but if he’s not the Father, Mother, or Eccentric Uncle of Horror, he’s certainly the Godfather.

Lovecraft’s style can be hard to take if you’re only used to reading modern authors. He’s very descriptive, and really does spend a lot of time on “tell” instead of “show”. But you know what? It doesn’t matter. Because Lovecraft came up with some of the scariest stuff imaginable.

He was also a very inclusive author, encouraging others to play in the sandbox he’d built. As J.C. Koch, I write horror, much of it Lovecraftian, and I’m always grateful that Lovecraft built this amazing world he encouraged the rest of us to play with.

But The Night Beat isn’t horror, it’s paranormal/urban fantasy. And it’s not written by J.C. but by Gini Koch. So why the Lovecraft fangirl love letter? 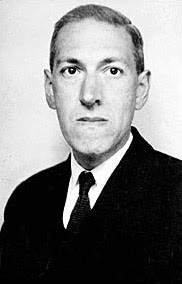 Well, if you’ve been following the Necropolis Blog Tour, you know by now that what my gang of Prosaic City policemen and Necropolis Enforcement operatives are fighting is something that sounds like it stepped straight out of a Lovecraft story.

The Night Beat was a fun book for me to write. I love the characters, and I loved bringing what I consider the “guest star” or “cameo” characters into the world as well. The book is chock full of “is this who I think it is?” moments. As you journey on this particular blog tour, you’ll meet one of them. And after this, who it is won’t be a total surprise.

That’s right. Lovecraft allowed everyone to play in his sandbox, so I brought him over to play in mine. Hey, it’s kind of an homage. He’s a fun guest star, and I think you’ll enjoy him as much as I do.

And if not, don’t blame me if Cthulu shakes a tentacle at you in dismay. 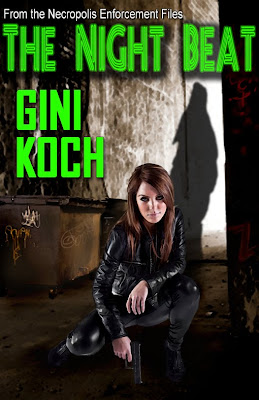 Blurb:
The majority of Prosaic City’s residents don’t know that their town exists on top of another place -- Necropolis, City of the Undead. For the most part, the two planes of existence manage to remain separate. And when they don’t, Necropolis Enforcement has beings in place to ensure the general human population remains blithely clueless.

Victoria Wolfe is more than just a policewoman. She’s an undercover werewolf assigned by Necropolis Enforcement to work Prosaic City Police’s Night Beat. Victoria’s comfortable working the shift where all the weird comes out to play, especially since her partner is also her perfect man. Or would be, if Victoria could ever work up the nerve to tell him she isn’t like other girls.

It’s hard enough being a werewolf in disguise, but when a creature from the Depths of Hell shows up in an alley preferred by junkies, bums, and hookers, it’s going to take more than just Victoria’s special gun and werewolf skills to subdue the ancient Sumerian demon. Especially when the demon is merely the start of what appears to be a major takeover attempt by the Prince of Darkness.

Soon all of Necropolis Enforcement’s Undead Brigade is involved in the fight to stop the Prince’s Major Minions from taking over Prosaic City and the rest of the human plane. But it’s Victoria who has to face the Adversary and figure out what intricate plan Lucifer has up his wings before everyone she cares about is destroyed.
In other words, it’s just another day on the Night Beat.

Maurice got into the act. He hated going into what was politely called the Ancient Vampire Form, but he wasn’t an idiot. If we didn’t stop this thing, we were going to be dinner or minions. We were at the top of the food chain and refused to leave that spot without a fight, and if we’d wanted to be minions we would have already committed our souls to the Prince.

From the little I could see as I chomped on a big face tentacle and got flipped around, Maurice was attacking the stomach area, normally considered somewhat vulnerable. This thing had three top level, professionally trained, Enforcement personnel on it and all we were doing was causing it to stagger a little. I got flipped around even more and realized we weren’t causing the stagger -- the thing’s foot was sort of caught on the lip of the hole the Dirt Corps had created.

Author Bio:
Gini Koch lives in Hell’s Orientation Area (aka Phoenix, AZ), works her butt off (sadly, not literally) by day, and writes by night with the rest of the beautiful people. She writes the fast, fresh and funny Alien/Katherine “Kitty” Katt series for DAW Books, the Necropolis Enforcement Files series, and the Martian Alliance Chronicles series for Musa Publishing. As G.J. Koch she writes the Alexander Outland series for Night Shade Books. She also writes under a variety of other pen names (including Anita Ensal, Jemma Chase, A.E. Stanton, and J.C. Koch), listens to rock music 24/7, and is a proud comics geek-girl willing to discuss at any time why Wolverine is the best superhero ever (even if Deadpool does get all the best lines). She speaks frequently on what it takes to become a successful author and other aspects of writing and the publishing business. She can be reached through her website at www.ginikoch.com

Giveaway:
Gini has kindly offered an electronic copy of The Night Beat to one lucky winner, open internationally.

Thanks for a great post! Congrats to Gini on her continued successes and here's wishing you much, much more! (and I say this as a rabid fan cuz I wantz more books :) but in a nice, non stalkerish way)

Oh great post, and each one I read I learn more about the book and that I do need this one. :D Thank you!

I'm loving these excepts and contests! Thank you so much Gini and I'm so very happy you're getting more books out there! Jesse
jesse (dot) ivanoff (at) gmail (dot) com

This is going to be a great read. I love the blurb and excerpt. Thank you.

Not entering! I never did read Lovecraft, as I totally can't read horror. Which will totally make me avoid your books as J.C. Koch, which is a sad thing for a glommer.

I admit to emitting a high, sustained squee of joy when I realised who HP was in the excerpts! Bliss!

All I need now is for Schrodinger's cat to make an appearance in a Gini story ;)

Great interview and thanks for the contest.

I love Gini's books and I can't wait to read this one. Thanks for the giveaway.

Gini, I'll accept that I have to get an e-version for now, but please, can you beg your publisher to drop the price a bit on the dead tree version? $14.99 is a bit steep, even for me.

Only ten entries, I have a good chance to win ;)

Great stuff here too, Gini, although, this excerpt is slightly smaller than those that I've seen so far....