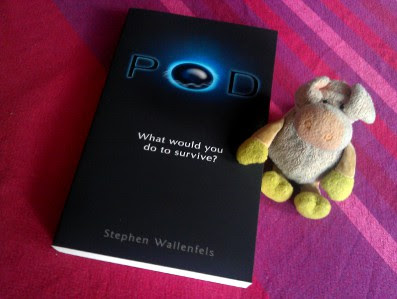 What is it about:
Surviving a massive alien siege is one thing-surviving humanity is another.

I'm all cried out. I'm still alone. The sky is full of giant spinning black balls that kill anyone stupid enough to go outside. I've only been out of the car twice-once to pee and once to look at the sky. That one look was enough for me. Now I sit alone in the car, staring out the window like a rat in a cage. But I don't have anyone to look at. The parking garage is empty, except for twisted-up cars, broken glass, and the smell of leaking gasoline.

POD is the story of a global cataclysmic event, told from the viewpoints of Megs, a twelve-year-old streetwise girl trapped in a hotel parking garage in Los Angeles; and sixteen-year-old Josh, who is stuck in a house in Prosser, Washington, with his increasingly obsessive-compulsive father. Food and water and time are running out. Will Megs survive long enough to find her mother? Will Josh and his father survive each other?

What did I think of it:
This was a really gripping read.

This book is actually two stories: one about Megs and the other about Josh.

I think I liked Josh's story the most. It was emotionally intense and I could easily picture myself in his place.

Megs' story was more suspenseful and had more action. It was cool, but where I was emotionally invested in Josh's story, Megs' story felt more like a suspenseful thriller.

The difference in their situations and how they handle things did make for a compelling read though and I couldn't put the book down. Things just kept getting more and more desperate and I was eager to find out how everything would end.

And that takes me to the one negative thing about this book:
The ending.

I really felt like Wallenfels didn't really know how to end this story and that made for an ending that had me raise my eyebrows. If the rest of the book wasn't as good as it is, I'd have felt like throwing the book across the room.

So while I did enjoy this book very much i'm not too sure if I would pick up another book by Wallenfels.

Why should you read it:
It's a suspenseful story about human nature

Actually, POD's on my wish list, but I'm disappointed you didn't care for the ending ... I hate a story where the ending feels either rushed or poorly executed. Hmmm, maybe I'd best get this one from the library first before I buy it.

I can advice getting it from the library. The ending really spoiled the book for me. But other people seem to love the book including the ending, so maybe it's just me.