This is Not a Test - Book Review 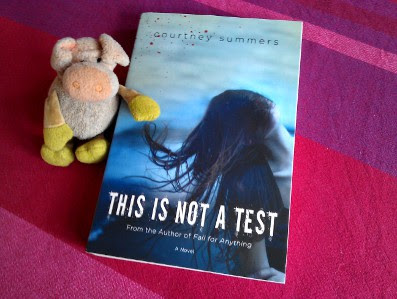 This is Not a Test
by Courtney Summers

What is it about:
It’s the end of the world. Six students have taken cover in Cortege High but shelter is little comfort when the dead outside won’t stop pounding on the doors. One bite is all it takes to kill a person and bring them back as a monstrous version of their former self. To Sloane Price, that doesn’t sound so bad. Six months ago, her world collapsed and since then, she’s failed to find a reason to keep going. Now seems like the perfect time to give up. As Sloane eagerly waits for the barricades to fall, she’s forced to witness the apocalypse through the eyes of five people who actually want to live. But as the days crawl by, the motivations for survival change in startling ways and soon the group’s fate is determined less and less by what’s happening outside and more and more by the unpredictable and violent bids for life—and death—inside. When everything is gone, what do you hold on to?

What did I think of it:
This was a really intense read.

I was a bit disappointed at first that the zombies were kind of background noise instead of them having a bigger role in the story, but that disappointment soon vanished.

Summers wrote a beautiful and grim story about human nature. Trapped in their school the six students have nothing to fall back on except each other. But there's conflict, mistrust and other emotions getting in the way of working together.

I really liked how Summers created tension between the students. It was very believable and there were moments I really wanted to whack some of them for their behavior.

I had some difficulties with Sloane. She's presented as someone who's already lost everything and wants to be done with living. For someone in that state she had lots of fight left in her and that made her character feel a bit off at times.

But that small criticism aside this is a great read that I can advice to anyone who loves a good story about human nature and about how people react when society falls away and they have to fight for survival.

This book will get a place on my keeper shelves and I will check out what other books Summers has written.

Why should you read it:
It's a grim and intense YA read.

I also wished that the zombies played a larger role, but it was still a good story. I also agree with your issues with Sloane. I was honestly a little disappointed with the book, mostly because of the huge amount of hype surrounding it. Thanks for the honest review!

Same here, guys! As much as I enjoyed this story, I really wish the zombies had more than a bit (get it? BIT! heh heh) part. Sloane felt *off* to me, but then again - maybe I just couldn't relate to her due to the misery of her back story. Dunno.

Glad to hear I wasn't the only one who had problems with Sloane.

I was actually excited to hear about a "zombie book" in which the gore takes more of a backseat to the drama. I think there's a lot of potential in the psychology of surviving a zombie outbreak. When I finally read this, I hope Sloane isn't too much of a deal breaker for me.